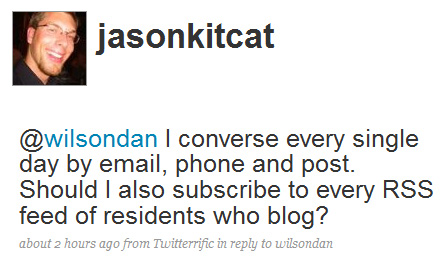 Jason Kitcat is a Green councillor on Brighton and Hove city council. It’s probably worth noting that I didn’t vote for him: I’m a member of the Labour party. That said, he has responded to my communications regarding recycling when I’ve sent them. For the record, I found his replies to my emails defeatist, largely unhelpful but prompt. He has never proactively contacted me using any medium. Not even a leaflet through the door.

So when I discovered Councillor Kitcat was on Twitter, I obviously followed him. I have also read his blog for some time and also subscribed to the RSS feed. Nothing unusual there. I follow a load of people on Twitter and spend time every day keeping up with the vibrant chat and tweets of the people I follow. I wouldn’t do it otherwise. I also follow dozens of bloggers via RSS. It’s fun to read what folk say. I also try and reply to posts that provoke me to do so.

Obviously, this is relevant to the work I do but more importantly I get so much out of it. As far as I’m concerned, if you join up to Twitter, start blogging and reading blogs then you’ve joined a conversation. It shouldn’t be a chore and it isn’t compulsory.

But vitally, it isn’t about simply broadcasting. I could cite the Cluetrain Manifesto or just good old-fashioned manners. But I won’t. I’ll tell you why I’m in on it: I find it enriching. I love to find out what people are doing, enjoy the information and insight. I’m not waiting for people to come to me. I get out there and listen to what they’re saying. Different and challenging opinions are the bread and butter of social media.

I recently asked Councillor Kitcat why he only follows 21 people (those 21 are mostly Greens or the ‘usual Twitter suspects’). He is followed by more than 100 and also solicits Twitter followers on his blog.

I needless to say replied: “Idea: @jasonkitcat Why not consider & respond to the people you represent? Or are constituents just kids at a school disco, Sir? #brighton”

I though his final response was really rather telling: “@wilsondan I converse every single day by email, phone and post. Should I also subscribe to every RSS feed of residents who blog?”

To answer Kitcat’s question with another: why not? I’m following him. I read his blog posts. He is soliciting readers via his blog. And seeking followers on Flickr and YouTube. He is also seeking our votes. So why not proactively sign up to read and enjoy Brighton’s bloggers? This city is blessed with many brilliant talents, voices and characters he might enjoy. This city is home to a myriad businesses (many in his ward) who blog and tweet and converse. He may enjoy that too. I certainly do. I learn so much.

Councillor Kitcat is recompensed and required to converse with his constituents via email, phone and letter. He sought that responsibility. He is not shy about making his views known in the local newspaper. But it would be ever so classy if he also proactively listened and responded rather than just waiting for us to come to him. Why not sign up to some RSS feeds? Enjoy the tweets of the people of Brighton!

This Internet social web 2.0 thing is a conversation. It’s so much more than ‘the Kitcat Channel’. It’s about being a human and using your human voice. And if anyone doesn’t like that, don’t do it. But, alas, to Councillor Kitcat, we’re just kids at the school disco chattering inanely. Maybe he sees himself as the teacher, keeping us all in check?