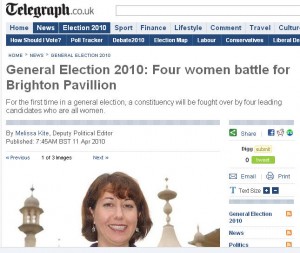 It’s such a privilege to have a choice of women as your next MP. It’s also terrible. It breaks my heart that Labour, Conservatives and Greens all have credible female candidates. Why are they fighting each other?

It’s great that my next MP will be a woman. And yet I look around and see male candidates in other seats who are frankly not up to scratch.

Take my Tory, Charlotte Vere. I disagree with her on so much and am put off by her often negative approach. But I rather like her energy and normality. She’s funny. She’s clever. She has great experience in business and as a mum. We need more women like her in parliament. There are too many Conservative stuffed shirts who will get elected this time (probably including Hove and Kemptown) and if you’ve got to have a Conservative, I’ll have Charlotte thanks. I think it’s a shame that she is unlikely to be in the Commons this time around.

Caroline Lucas is professional and experienced. She has championed her causes in Brussels well. She is the acceptable face of a Green party with bonkers views on the economy and science. Even if I don’t like her all that much (to me she seems sanctimonious and a little haughty), she works hard, does her thing and wants to be an MP badly. It is perhaps ironic that her replacement MEP, if she wins, will likely be a chap.

Knowing Nancy Platts well, I just know she’ll be a great MP. I value her local touch. She gets Brighton and loves it here too. She’s a good campaigner who isn’t afraid to get her hands dirty. It was easy to be jaded about being a Labour man before Nancy. Now I’m proud to be Labour again. She’s inspiring.

And yet I know plenty of folk find Caroline and Charlotte inspiring too. That’s the tragedy of Brighton Pavilion. We can only have one of them. They’d all be good MPs. Heck. They could all become great MPs. It’s such a shame that they aren’t all standing against some really mediocre men. Having all three of them in parliament come May 7th would be a triumph. But we’re stuck with tragedy. Horrid. Horrid.