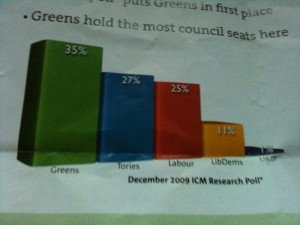 A friend asked me the other day: “I don’t want a Tory MP. So who’s telling the truth: Labour or Green?” He was referring to the Labour and Green leaflets that are going out and both claim to be the only ones who can beat the Conservatives here. It’s a fair question and the answer is: we both are and yet we don’t know.

Labour likes to remind voters of the last General election result. Greens came third and Tories second. Labour won with quite a comfortable majority of just over 5000 and there are some boundary changes this time around which notionally add a bit more.

The Greens cite European and local elections in 2007 and 2009. Fair enough. But their December ICM poll that the Greens did was a masterstroke. It puts them well in the lead (as well it might). I would never commission a poll that didn’t say what I wanted it to. And it’s a bit shabby that the Greens don’t mention on their leaflets that they bought and paid for that very handy graph!

For me, citing the European and local elections is fine but it isn’t comparing like for like and turnout is totally different, and much higher, in General Elections. That majority is a hill to climb and I am sceptical the Greens can find the votes outside the muesli belt to beat Labour.

The other unknown is what the Cleggsurge will do. Green activists in Patcham confessed to being pretty worried about that yesterday.

It seems to me that an anti-Tory tactical vote should go to the incumbent. I know the Greens like the bookies, but going from 3rd to 1st in a general election is a big ask, especially when turnout is high (which one would hope it is).

I think the only honest answer is to make a positive choice for the parties, the policies and the women who want to be our MP and hope that the Tories come in third!