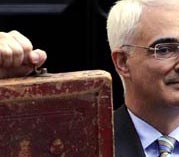 The one aspect of the 2009 Budget that made the headlines was the 50% Income Tax that will be levelled on incomes over £150k. And let’s recall what that means: if you earn more than £150k, you’ll pay 50% on that portion of your wage over £150k. I’m personally in favour. The Tories haven’t said they’re against. Not many people relate to it, in my experience so far. I suspect it’s a genius move.

Overheard in the City of London:
Well-dressed lady: Paying 50% tax is a problem I’d like to have

Via Text (re the Chancellor):
Public sector worker: I’m not sure what else he could have done.

In the pub:
Me: Hey Jeff. What do you think about the Budget?
Jeff (SME, who votes Tory): Fags, beer or petrol?