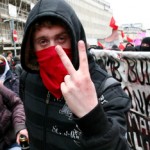 Peaceful protest is a British right we cherish. That’s why protesters were allowed the freedom of the city I live in yesterday. Marching, demonstration, even disruption to traffic is justifiable. We saw bottles and cans thrown at police, paint splashed on public and private property, protesters damaged homes, business premises and, most egregiously, they damaged honest folk trying to do an honest trade on a Bank Holiday Monday. Peaceful protest is a British right we celebrate.

Peaceful protest is a British right we enjoy. That’s why I have joined demonstrations many times in my life: Reclaim the Streets, Anti-CJA, War in Iraq to name but a few. The right to protest is a freedom we celebrate. It’s a right I will defend until the day I die. But all rights come with responsibilities.

‘Smash EDO’ (the organisation that coordinated the demo) refused to cooperate with the police despite requests. ‘Smash EDO’ has called the actions a success and hasn’t condemned any acts of unpeaceful protest. Wheelie bins were used as weapons by protesters. Police were attacked. The Palace Pier was stormed. Flares were lit and paint bombs were thrown. ‘Smash EDO’ wants rights but is unwilling to take responsibility. Rights come with responsibilities.

What was this protest about? It’s unclear. It was variously “against the war, capitalism, and the arms trade.” EDO is a company with premises in Brighton. Apparently, EDO makes components for weapons that the Israeli Government used against Gaza. That’s where ‘Smash EDO’ get their name.

The right to protest is a freedom we protect. But we all also have responsibilities. The march today roamed all over the city. People danced on top of a cafe at the pier. An expensive police presence was required (and as far as we know right now it looks like it was well executed without G20-style violence.) In any case, the police will be held accountable for sure. By the press, police scrutiny bodies, citizens. But what of the protesters? They exercised their rights: did they consider their responsibilities?

Valued tourists didn’t come to Brighton on a May Bank Holiday because they (quite understandably) feared they weren’t safe. Businesses in the city centre and on the seafront will have lost custom. This city made sure that protesters were heard. Protester: we enforced your rights… now it’s time to take responsibility.

This protest wasn’t peaceful. Paint. Flares. Windows smashed. Graffiti. Vandalism. Police. Inconvenience. Traffic chaos. Customers discouraged. Shut streets. Thousands of businesses in Brighton were adversely affected. And yet the one company you didn’t inconvenience was EDO. Any rational person calls that failure. It’s time to take responsibility and apologise to the people of Brighton.