Matthew Robson (aged 15) wrote a memo for Morgan Stanley called ‘How Teenagers Consume Media’ and caused a stir. I’m hoping to be as helpful with my own memo along similar lines. Don’t expect it to make the front page of the FT any time soon though.

Radio
We listen to the radio a lot and increasingly we’ve started enjoying Wake up to Wogan. Terry’s dry wit is a great start to the day. Moving Jo Whiley to the weekends seems like a shame. Singles we bought in our teens are increasingly being billed as oldies. We miss John Peel.

Television
We watch much more television than we confess to and constantly complain that TV isn’t as good as it used to be. Nowadays it’s all cooking, antiques and property shows. Programmes about making money from buying and selling houses have become less satisfactory since we fell into negative equity. iPlayer means we can catch up with Celebrity Masterchef at our convenience. Interactive TV means things like calling Noel Edmonds on Swapshop, writing to Jim’ll Fix it and shouting at the panel on Question Time. 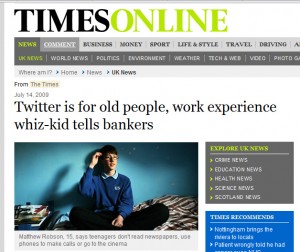 Newspapers
You can’t beat a sunday morning with a coffee and the quality papers. You can’t do that on a Nintendo! Otherwise, Metro or other freesheets that you pick up on the way to work.

Music
We’re angry about music because the industry has fleeced us time and time again. We’ve bought music on vinyl, tape, CD and downloaded it too. And yet Paul Mcartney still hasn’t stopped complaining about how we’re ripping him off. We have no idea what DRM is but we suspect it’s a pretty good university second only to Oxford and Cambridge.

Devices
We remember when having a telephone meant that mum used her special phone voice and said our own telephone number when she picked up the receiver. Calling after 6pm was cheaper and calling abroad was prohibitively expensive. We used to phone up other people’s houses and just hope they were in. Yes, really.

Internet
31 years olds are adept at using the internet. Many people look at pornography.

Friends Reunited introduced us to social media and reconnected us with everyone we ever lost touch with from school. We spent a decade regretting our early enthusiasm but remain satisfied with the knowledge that the school cool kid who once taunted us now works in Tescos and has three kids by three different partners (the oldest child is 12!). We deserted Friends Reunited when our mum and teachers joined but there’s still someone we had a crush on in year 9 (just after it stopped being the fifth form) that we keep an eye out for. Just in case.

MySpace is a mystery. It looks like a teenage bedroom wall covered in posters and magazine cuttings. We hate it because the Guardian says it’s owned by Rupert Murdoch. We know it’s very important for new bands (such as The Arctic Monkeys) hoping to make the charts but since they cancelled Top of the Pops we don’t see much point in the charts. We understand that MySpace is all to do with downloads. Downloads are just like singles. But free. Downloads killed Woolworths. Pick and Mix was better than MySpace.

Facebook is for baby photos, wedding photos and party photos. People who put up baby photos get most of their adult interaction via Facebook. Women who put up wedding photos look forward to the day when they can put up baby photos of their own. Married men are jealous of their single mates going to the pub a great deal more than they do. People who post party photos keep a close eye on the relationship status and are keenly aware that their profile picture makes them look better than in real life. Everyone plays a lot of Scrabble.

Twitter is great. It takes us moments to lie about what we’ve been doing. We seem more interesting, erudite and connected on Twitter than we really are in real life. A train delay is a great tweet and everyone wants to know about a trip to a farmers’ market. Here’s hoping no one asks us out for a mountain bike ride after last weekend’s tweets. We made it up.

Email gets checked every hour and our inboxes overflow with unread messages. But we still remember the romance of snail mail. We sent love letters in the post and got presents from granny. E-cards are a cop out. But we make snail mail better by using the internet to buy preprinted address labels, and we make our own Christmas cards from pictures we take on our DLRs.

Gaming
Monopoly, Cluedo and Scrabble at Christmas. Will consider getting a Wii when Chucky Egg and Pong are available.

Mathew Robson
We have no idea why a lad who should be wanking, drinking Merrydown cider in a graveyard and listening to Radiohead is writing plausible memos for an evil merchant bank. At his age we hated Thatcher and thought that a Labour government would make everything better. We did our work experience at the local B&Q. We still listen to the Levellers when we’ve drunk too much carbon-neutral wine from artisan vineyards in Dorset.