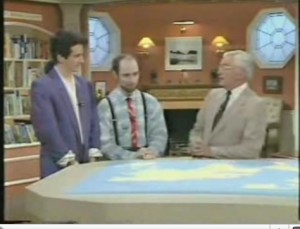 Early on, Channel Four specialised in Granny-Vision. Countdown was obviously vital for the old folk as well as students. Treasure Hunt was Sunday afternoon entertainment. Certainly in our household, it was family viewing. Especially if Granny was around.

Treasure Hunt in a nutshell (as I remember it). Anneka Rice is in a helicopter with a small TV crew. Kenneth Kendall is in the studio with a reference library and two (usually incompetent) contestants. The hopefuls must solve a series of cryptic puzzles so they can direct Anneka and the chopper to her next destination. Wincey Willis keeps track of progress on the map and looks slightly embarrassed to be involved.

I watched the below clip (and the rest) of Treasure Hunt a few weeks back and it’s astonishingly bad. Boring, slow and incomprehensible. The people in the studio can’t see what the people in the chopper are doing. The puzzles are impossible unless you have intimate knowledge of the locality in question and frankly it’s up to Kendall and Willis to provide the answers. Note to kids: this is a case study of how we’d find things out before the Wikipedia… we looked stuff up in a book.

With Wincey (yes, she also did the weather on morning telly) providing time checks and rolling her eyes throughout at the lack of action, Kendall was supposed to provide hosty gravitas. Instead, he’d would wander around, repeating the clue continuously and sometimes helpfully proffering books like an over familiar librarian in the early stages of dementia.

Not only was Treasure Hunt quite long lived and popular, but it was reasonably influential. Anneka Rice cemented her reputation as an action girl and went to the Beeb to make Challenge Anneka where she’d bully people into giving her stuff so she could rebuild a Romanian Orphanage on a wet afternoon. And all the time Anneka must be resplendent in her trademark jumpsuit. They will have to bury her in a jumpsuit. Poor girl.

Annabel Croft took over as the chopper babe but Treasure Hunt wasn’t really the same without Anneka running along and breathlessly demanding the two moron contestants in the studio where in the second rate tourist attraction she had just landed, she might be able to find the next clue. Chatsworth, the production company, went on to make the hilariously awful Interceptor… but that’s TV nostalgia for another day.