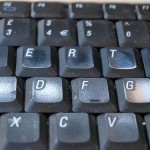 I’m inclined to use PCs. It’s how I began. It reflects what I need computers for. It speaks to how I see the computer market and audience and, perhaps most importantly, it is a vote of confidence from my experience. It’s also a bit of “yah boo!” at the ‘Mac Wankers’ who like to take the piss out of us PC users and say things along the lines of: “Dude. Bill Gates is a wanker! Loser! Macs rule!”

But after a long time, I’m on the verge of changing my mind and going Mac. But not quite. Not quite.

Key to my loyalty has been a very effective Dell laptop that has never let me down. Never let me down. (Ok. Once. Service Pack 3. Lesson learnt.) Ever since I bought it in January 2006 it has been a reliable, lightweight, versatile and frankly indestructible machine. It’s been punished. Travelled everywhere I’ve been. It does what I want it to do admirably (which is predominantly writing and net use although increasingly I’m meddling with photos, videos and sound files) and it has so far proved to be unbelievable value. It’s the third or fourth (via a few work PCs) in a succession of very reliable machines from Dell that takes me back to 1997 when I first took a laptop for University.

I bought my latest machine in April this year and in terms of sturdiness the new Dell machine isn’t as good. Vista has also been an absolute disaster. I’ve actually gone back to using the immortal XP machine. God I love her.

In the past months, confronted with Vista and the new machine, I’ve thought about making the switch to a Mac. You know me. I do my research. My major concerns relate to the fact that I deal professionally with organisations who uses old Windows machines and I need Word and PowerPoint docs etc to reach people with formatting intact.

I’ve asked Mac users: trust me, I know plenty. Many of whom who have been useful but many have not. I have an iPod. I understand that Apple make beautiful things. But it’s astonishing that so many Macists rely on evangelical statements that even your average fundamentalist Christian would shy away from because they’re so unsubstantial. When I ask why I should swap to a Mac, and whether this or that will work and whether wotsit and the other can be done, I’m not interested in answers that start with: “As Steve Jobs said…” I am as uninterested in the Book of Jobs as I am with the Bill is Right brigade.

The thing is, remember, my PCs have served me well. They’re not the crap ‘Mac Wankers’ keep telling me they are. Of course, I don’t code, or graphic design or game on any serious level. This two or one click mouse thing bothers me not. Taskbars and brushed stainless steel. Meh. Snow Leopard? I have no tangible idea what that practically means. But Macists tell me “it’s amazing”. I kind of accept that Macs are indeed better. But is one Mac, in particular, going to be better for me? That’s the answer I want. It’s certainly not going to be cheaper, after all.

I must have been into Apple Stores a dozen times in London and Brighton looking for the answers I need. On one occasion I wandered in, started meddling with a Macbook and got asked to move along because other people wanted to “experience” it. I’d been there about two minutes.

Apple Stores represent an unusually pointless experience for the uninitiated. I visit them like I visit Churches. I just look at things and admire them and watch people who know what they’re doing, doing what they want to do. As a non-believer, I just amble around respectfully, appreciate, nod, show respect and leave. It’s a pleasing pastime but not necessarily very illuminating. I’ve visited hundreds of Churches and never found faith. It’s rather the same with Apple Stores.

On my two appointments at the genius bar to get the skinny, one was excellent and most informative (and 90% got me there). The other was nonsense and, to continue my Church simile, was like taking confession whilst the priest tried to find the “Fuck Off” App on his iPhone. To the smiley unlistening, uber-euro, seemingly non-gender specific Appleton with trendy specs, an asymmetric, pedantically scruffy fringe and a faraway look suggesting a night before enhanced by hallucinogenic drugs: there’s no such Windows program as Metebelis 3. I made it up (or rather stole the name of a planet in Doctor Who). That’s why I scoffed at your claim that not only will Metebelis 3 work on a Mac, but it will work even better.

My current inclination, mostly because having bought one computer in the past 6 months I’m not inclined towards the expense of buying another, is to get Vista off my new PC and live with it for a few months and spend a bit more time learning about Macs. A few snatched minutes in Apple Store hasn’t been enough for me but now I’m back at Uni, it’s good to note they have Macs for use there. Maybe experience will tip the balance. But as I look at the latest raft of Mac and Windows ads slagging each other, I’ve got to say: if those guys could focus on details and facts, I’d find that a great deal more useful.