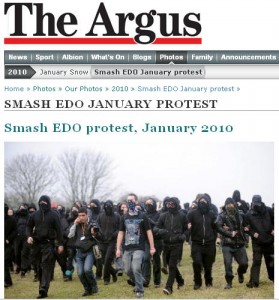 When I was 17, I was arrested during a Reclaim the Streets demo at the Old Steine in Brighton. I spent the afternoon in cells and my bicycle was confiscated. Subsequently, I went to court, pleaded guilty and took the punishment (bound over for a year and a modest fine, as I recall). On the protest I was breaking the law intentionally because I was making a point: it was civil disobedience. I think protesters should sometimes break the law if that’s what it takes to be noticed. Gandhi, Pankhurst, Mandela and King would agree.

I have taken part in so many demos and protests that I can hardly keep count. The highlight was opposing the Iraq war in London on that February day in 2003 with a million others. But that was vanilla. I’ve faced up to police as they’ve beaten their shields with their batons with the sole intent to intimidate. I’ve been filmed and snapped by the rozzers before anti-terror legislation was enacted. I’ve mass-trespassed. I’ve squatted. I’ve been questioned, jostled and jibed by coppers. I’ve seen the underside of a police horse closer than I ever want to see one again.

The demos have been for causes various. I was against apartheid and shutting Brighton’s St Luke’s Pool (aged 9) in the 80s. I passionately opposed the CJB/CJA and French nuclear tests and other things in the 90s. More recently I’ve opposed student tuition fees and the Iraq war. I could mention direct action against fox hunting and car rallies on the South Downs. I even joined my mum to protest about midwife pay once.

But I never hid my face.

Protest is about standing up, being open, speaking out, hopefully raising the profile of the cause or issue, and being counted. For me, a protest doesn’t have to be legal but it must have peaceful intentions. I know how demos turn out. With opposing forces of protester and police, sometimes it gets edgy and ugly. As a protester, sometimes you get arrested. Usually you don’t. But passion doesn’t mean aggression. Violence should never be an aim.

That’s why I can’t support the Smash EDO action and protesters. Not only is the case unproven but they seek to make it anonymously. Any group that goes out and protests behind scarves and balaclavas is hiding something. That’s not how we should do it here. Protest must be proud to be credible. Ask Gandhi, Pankhurst, Mandela and King.