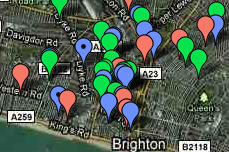 The Brighton Argus has embarked upon an interesting social media ‘crowdsourcing’ experiment. Voters in the hyper-marginal Brighton Pavilion parliamentary constituency are invited to report their encounters with party candidates via Google Maps.

The idea sprang from the Brighton Future of News group. Spearheaded by the pioneering Online Editor of the Brighton Argus Jo Wadsworth, with Sarah Marshall and Steve Bustin, the map is a collaborative experiment to share the political conversations candidates have with voters in the relative privacy of the doorstep and away from the prying eyes of the media.

It’s a good idea and I wouldn’t be surprised if the aim was to expose possible discrepancies between what candidates say publicly and ‘privately’: that’s a good thing. We’re not yet 24 hours into the experiment and what do we see?

When the map was first published the Greens had a tiny handful of flags (3?) and a party apparatchik has spent some time in the past day adding those little green flags. Tory candidate Charlotte Vere told me on Twitter that her ‘flag count’ grew because she was “just including the points from my own map.” Labour candidate Nancy Platts has only used Twitter to add her red flags.

Can the best efforts of a local newspaper experimenting with social media, keen to report one of the most fascinating electoral races in the country, usefully shape a tight run race? I do hope so. If 2010 is the first ‘social media’ General Election, a map such as this with genuine input from voters represents a fine way for people to raise issues and offer perspectives on the campaigns. Politics isn’t just about broadcasting, I venture. It’s a conversation.

So far, from what I’ve seen, nobody unrelated to the three local campaigns has contributed to the Argus map. That’s a real shame.

As I have often said to businesses large and small over the years, the social media secret is letting go. Give up control and let other people chart the course of your journey. Even to someone like me involved in politics, this map shouldn’t be yet another channel we use to skew the discussion by showing how omnipresent and marvellous the parties are. It must be an opportunity to listen. Let’s follow the roadmap rather than draw it. Just for once.

This map will be all the more informative and intriguing if the party people leave it alone and ensure it’s a forum and outlet for the people that matter to express a view. I think we should let democracy breathe. I’m looking forward to day two… and three… and beyond…

Disclosure: I am a rank and file member of the Labour Party in Brighton Pavilion. These ain’t nobody’s views but my own.