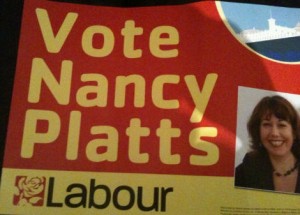 Against my better judgement, I’ve decided to write daily notes about my experiences in the 2010 General Election up until May 7th. It’s all part of my personal aspiration to blog a bit more this year. I also want to add my own reflections to the political discourse. That desire is general and also local: Brighton Pavilion is one of the most newsworthy contests in Britain but I think we also need to talk about politics more.

I honestly think that people like me who are closely involved with party politics must be a little bit bonkers. I’ve volunteered on and off for the Labour party since my teens. But this is the first election I’ve ever been more than a deliverer and a canvasser. I’ve known Labour’s candidate Nancy Platts in Brighton Pavilion well for a while now. I’m also quite close to Labour’s campaign planning.

I’m not going to be overtly partisan. I am proud to be a Labour man but I want to look and think more generally about the process and culture of a General Election. Much of the campaign lark is as fascinating as it is bizarre. I’d like to cast a little light on that. I also want to make some personal observations.

The risk, I think, in rattling out daily blogs lies in being a bit dull. So here’s my offer. I’ll try to be funny. I will always be honest and I want to be thoughtful. But I’m not going to break confidences and I’m not going to provide any ammo to the opposition if I can help it. That said, nothing I say will be cleared or censored by anyone but me.

It’s already day three of this General Election campaign so I have some catching up to do. But I hope you like the idea and hopefully enjoy my posts. Let me know. Ask questions. Slag me off. I have pretty a thick skin.