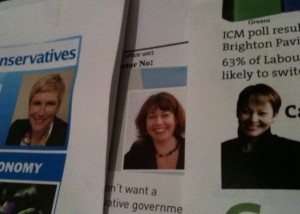 This weekend, as I sweated my way down the 50th set of basement flat steps on the delivery round I’ve done so many times in the past few years, I thought to myself that I would have never joined the party had I known quite how many leaflets I would need to deliver to prove my loyalty. God knows how many letterboxes I’ve encountered in the past 15 years.

It’s not the labour of delivering Labour leaflets that irks me. I need the exertion of the ‘Platts bums, tums and thighs regime’ more than most. I just put my iPod on and feel the burn. Come May 7th, I’ll have buttocks of steel. I’m just more annoyed by the fact that I suspect that political leaflets have little impact at all. I say that as an internet marketing man who likes the numbers. Sure. We all get some slips back and comments forms too. But really, what does a leaflet acheive? Just look at the recycling bins.

I visited a friend on Saturday. All three flats in his house have a tray for post. All the parties locally had leaflets in them; Green, Labour, Conservative. He said that people were collecting their post, but not picking up the political leaflets. Most had been there for a week or more. The only succour I could find was the fact that the Tories have delivered the fewest leaflets. And that’s hardly succour at all.

You can’t make this shit up.

The Green leader of @BrightonHoveCC has been shortlisted for "Council Leader of the Year" award - despite piles of rubbish still on the streets of the city
https://lgiu.org/workstream/lgiu-ccla-cllr-awards-2021/

I've been thinking again about how Ghostbusters and Rentaghost had diametrically opposed business models.

Very odd. A Labour councillor has tested positive for Covid. No shame there. But they won’t say who. Have you met a Labour councillor in the last 48 hours or so? Should you be taking more caution? Shhhh. There’s the carpet. Here’s a brush.

A #Brighton and #Hove City Council @BrightonHoveCC meeting was abandoned this evening when one of the councillors received a positive #coronavirus test result. Read our report ... https://tinyurl.com/covid-ends-meeting