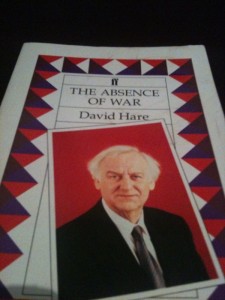 Do you know David Hare’s play The Absence of War? It’s a thinly veiled account of Kinnock’s experience in the 1992 campaign. In the play, Labour leader George Jones loses to a man rather more like David Cameron than John Major. I saw it at the national theatre many moons ago with John Thaw as Jones.

The penultimate scene is of the Conservative PM, Charles Kendrick, accepting victory in the early hours of the day after Polling Day:

“I have to say news has only today reached me, informing of just how grave the economic situation is – perhaps graver than we have recently thought. That means we shall be busy even in what we know may be difficult times ahead.”*

The scene has a sense of doom because the Conservative win their narrow victory by making promises in the campaign they had no intention of keeping and planned to blame the economy all along to roll out their true, hard policies.

It’s as true this week as it was in 1992. If Cameron becomes PM, expect him to tell you that it’s much worse than he imagined. The little shit.

* That’s the direct quote. I hope Sir David doesn’t mind me borrowing it.