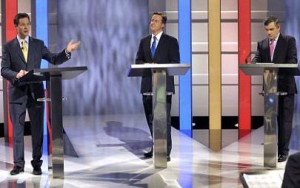 As the Cleggsurge shows, those TV Debates really have made a massive difference to the General Election.

Personally, I’ve found them a little dull. Cameron kept pushing for them and must surely be regretting that. He wasn’t as good as good as he reckoned he’d be. As a former secretary of the Eton College Debating Society, I must also say I think he rather let the old school tie down. Georgics for you, Cameron!

Clegg showed why the Liberals have always wanted these debates and Brown didn’t screw them up. That feels like victory enough for Labour.

Further back. Attlee vs. Churchill. Clem could’ve rebutted Winston’s claim that Labour would need a Gestapo. Think of that. Further back! Asquith and Lloyd George! Gladstone and Disraeli would have been fun. Well, Disraeli would’ve been funny. Gladstone would have been serious and by far the more clever. But then, I think he actually was a secretary of the Eton College Debating Society in his time too. I think Gladstone was also in Pop (was he?). I don’t think Cameron was. But then I wasn’t either.

And then way back, let’s go way back. What about Cromwell versus King Charles? A fourway? William of Normandy, Harold Godwinson, Harald Hardrada and Edgar the Atheling! Caeser and Brutus. Jesus and Pilate…. Adam and Eve.