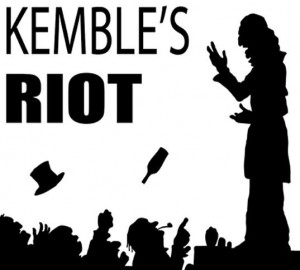 If you’re looking for a Brighton Festival fringe tip, I suggest you get along to Kemble’s Riot. It’s running for three nights this weekend at the Old Courtroom. Let me declare my interest: it’s a new play by my friend Adrian Bunting and I’ve offered a few modest pearls of wisdom on the script. But don’t let that put you off. What’s it all about?

In 1809 a night at theatre was the nightly pursuit of Londoners of every class and the stars of the day were the great actor John Kemble and his sister Sarah Siddons. Kemble was not just the talent, he was the impresario. Imagine that Simon Cowell could act: that’s Kemble. So, when Covent Garden theatre burnt down, not only did he lose his stage but he lost everything. And he didn’t have insurance. He was ruined.

Kemble did manage to rebuild the theatre, but the debts he incurred meant that the ticket prices had to go up. The theatregoers of London didn’t much care that they had the finest theatre in the world for their entertainment but they certainly begrudged that Kemble was pocketing an extra sixpence for their pleasure. For 66 consecutive nights they rioted and disturbed every performance.

Kemble’s Riot tells the story of the riots, and encourages you to join in too. But who wins? The people? Or profit?

The play speaks to the bankers and the bailouts and the nature of protest. It’s a really interesting new bit of theatre and the cast is great too. George Dillon plays Kemble. I saw a run through yesterday and it’s very, very good. Bag a ticket. It’s going to be a Fringe corker.