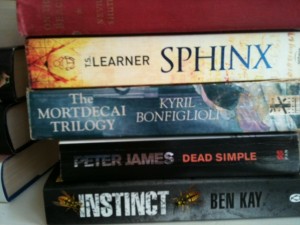 Back in at the start of 2010, I resolved to read a book each week for pleasure over the course of the year. My total at the end of the year was 48, which isn’t too bad. The general election campaign gave little time for reading and I blame that for my falling short.

That said, I did read The Communist Manifesto and Bagehot’s The English Constitution (to see what he said about hung parliaments) in spare moments between knocking on doors and writing leaflets and letters.(For the record, he doesn’t really say anything of note not least because the party system wasn’t rigid when he was writing.)

I want to blog about some the books I enjoyed, as an aide memoire more than anything else. And I do love a thriller, so I’ll start there. Graham Greene would more accurately call these ‘entertainments’ and I’ll adopt that as a preferable and less pejorative term. In part, I enjoy a rollicking romp of a read but I’m also doing some research. Yes, I’m writing a potboiler in my (copious, ahem) spare time. Proper books soon.

Nevil Shute, On the Beach Roll back five decades, civilisation in the northern hemisphere is destroyed by a nuclear holocaust. In Melbourne, Australia a sort of life continues with the knowledge that the toxic fallout is on its way and inevitable some time soon. It’s a sort of kitchen sink nuclear drama that follows a small cast towards death. Surprisingly, there’s not much on the morality or the ethics of nuclear weapons, and almost no geo-political context. But it’s compelling nonetheless if a little starchy at times. Shute is an intriguing writer because he is the first real Australian novelist. This is one of his classic works.

A murder thriller set in Sussex and the first of James’s Detective Superintendent Roy Grace books. People have been raving about them for years but I have never picked one up. The deeply disturbed and macabre plot is delicious and James is good at spinning clever characters with sparse pen portraits of his cast. Funnily, the least interesting thing about this book is the local (for me) setting. He keeps a very sinister and twisty plot alive over the course of the book so well. To other writers, just one of his various plot strands would be enough but here he gives us so much action and I just love that. I’ll read some more soon, I hope.

I was travelling on trains a lot at the start of the year and they kept getting delayed by snow. So I picked up the biggest tome I could lay my hands on at Smith’s at Brighton station. This epic tale of family lives entwined over three millennia is a beautiful piece of historical fiction. Wry, profound and amusing, it’s a very readable bit of history. Rutherford does something clever by tracing family traits over the centuries and that works so well. It’s massive work of fiction that constantly informs and entertains.

Kyril Bonfiglioli, The Mortdecai Trilogy This volume has languished on my bookshelves for 15 years unread. I can’t believe I didn’t pick it up before because I loved it. Charlie Mortdecai is a disreputable London art dealer and the book follows his scrapes, with his delightfully violent butler Jock, through the world of London’s criminal underground, international espionage and a lot of food and drink. It’s funny as hell, unabashedly snobbish and written with such baroque delight in arcane language that I needed the dictionary to hand. The swirling anecdotes are such a thrill to swim with. If you like Wodehouse and James Bond, this will not disappoint you. It’s just a shame there isn’t more.

The only book in that I really couldn’t bear or finish was a terrible mystery Egyptian thriller called Sphinx by T.S. Learner. It is so florid and over-written, so slow moving and so utterly unimportant that I’m astonished it made it past the slush pile. I didn’t make it much past page 30.