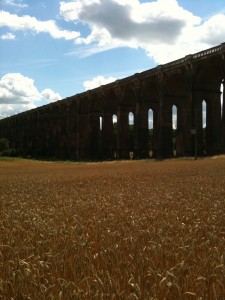 I tramped across a cornfield to take a proper look at something I’ve travelled over countless times. The beautiful and stately Ouse Valley Viaduct, just outside Balcombe, is largely unknown by the people who use it every day.

Many a London/Brighton commuter will tell you how lovely the view is from the Ouse Valley Viaduct, and how they will look up from their newspapers, text messages, iPads and coffees to take in a glimpse of an exquisite English landscape. Few consider the bridge below.

It dominates the valley and towers over farmland and trees with delightful Victorian arrogance. It could never be built today. Look at the furore over HS2. But with 170 years of hindsight, it now feels like part of the countryside it defaces. The designers John Urpeth Rastrick and David Mocatta were clever fellows.

The viaduct is 1475 metres long and 29 metres high. 11 million bricks make 37 arches which still carry more than 100 trains a day over a structure completed in 1841. Significant restoration was undertaken in 1996, and doubtless maintenance occurs all the time, but it is remarkable that those engineers, architects and builders way back then built a structure of such resilience.

And yet their forward thinking vision is hardly unusual. It’s such a useful reminder of what we owe those 19th century visionaries. Brunel, Bazelgette, Paxton, and Nash, to name too few, are all men we all much to. When you take a leak, a train or a walk in a public park, we salute those great people. Britain still rests on the tremendous foundations that 19th century industry and entrepreneurship made possible. People died too to make it happen, of course.

Whilst the Coalition cut every budget, and financiers refuse to fund any project that won’t see a return within the year, we should think ahead. Are we building anything in 2011 that people in 2181 will appreciate and rely on? Not in my backyard.

(I’m sorry my photos aren’t better. Go there and take better ones.)