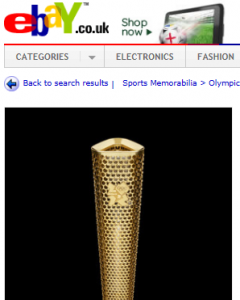 If I had a London 2012 Olympic Torch* from the relay, I’d sell it on eBay. I reckon it’s fair game for several reasons.

Firstly, that Olympic Torch is yours to sell. Relay runners have already bought it from the Olympic organisers for £199. It’s a not a gift (unless you ran for health drink sponsor Coca-Cola). It evidently already has a monetary value because they sold it to you. It just may be the case that they valued it too low.

Secondly, the Olympic Games have a commercial aspect. Sponsors are protecting their investments (you can pay for your Olympic Torch with Visa but not by Mastercard, apparently, because Visa are a sponsor), so why shouldn’t relay runners cash in too?

Lastly, these are hard times. Plenty of people need a bit of extra cash. There’s nothing wrong with turning a shilling. After all, we live in a country where soldiers sell their Diamond Jubilee medals on eBay.

I’m just worried that some of the hopefuls who have already listed their torches on eBay aren’t going to realise the best price they can. I know a thing or two about eBay. Here are my tips:

Snaps, words and vids work well on eBay: Don’t rely on stock photos or hasty descriptions. Tell the story of the Olympic Torch you are selling. Describe it well. Where in the relay is it from? Use original snaps you have taken and maybe consider a video of it too. If you want people to shell out big bucks, give them info.

Fend off phoney bidders: There are plenty of jealous, condemning and critical people who think you shouldn’t be selling your Olympic Torch. Protect yourself. On eBay you can Cancel Bids, set up Bidder Requirements and require Immediate Payment via PayPal from buyers. Use the tools to stop the spoilers ruining your eBay sale.

Free P&P works: If you want to sell your Olympic Torch for thousands, get top billing in eBay search by offering Free P&P. If you expect a buyer to shell out thousands of quid for the torch, it’s a bit naff to expect them to also pony up a tenner for carriage.

Charity sales: If you are selling your Olympic Torch for charity, use eBay for Charity or expect to be pilloried for profiteering at the expense of a good cause.

Get in early (or hang on): There will be 8000 Olympic Torches out there and 8000 runners. To get the best prices, get selling now. Or wait. You may find that in years to come that the prices rise.

And another thing. Just face off the criticism. It is your item to sell. Lord Coe, Boris Johnson and David Beckham may all have big ideas about the Olympics and what they represent. But none of them is short of a few jam butties.

Dan Wilson is the bestselling author of Make Serious Money on eBay UK (a guide to building a business on eBay). He is also a freelance writer, digital consultant and internet marketer. A former eBay staffer from 1999 – 2006, he was part of the team that founded eBay.co.uk.

* Somewhat unlikely. I’d wheeze and gasp myself through a 300m run but still look like a fat idiot in a white shellsuit.