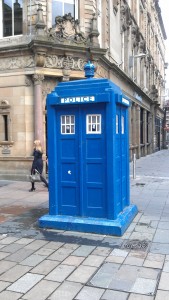 What was a Whovian with a few hours to spare in Glasgow to do, but have a tootle around looking for police boxes? The second city of the Empire is home to a several of the Gilbert MacKenzie Trench designed beauties and I managed to find two as part of my sight-seeing. Reports as to how many there are varies. There are at least four with some people claiming there are as many as six.

Interestingly, Glasgow’s police boxes used to be red. Indeed, the Wilson Street box was red until relatively recently. Now they are coloured in the more familiar Gallifreyan Azure shade of the Doctor’s Tardis. And very handsome they are too.

A master at work. The incomparable Dave Allen on teaching kids how to tell the time. ⏰ 🎤

Post pandemic we will need to talk about public libraries. Broadly people are for public libraries. And broadly local authorities are cautious about paying more for them. They are about space and books. For me a library is a place to write amongst books.

Lee Hurst had slipped my mind.

If I could buy @Coldwar_Steve a pint at this time, I would. This is a Hogarthian masterpiece. @didoharding in a barrel of cash is dead on.