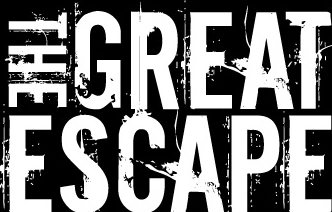 The Great Escape is an annual music festival held in Brighton. It’s not really like a festival (in the sense of Glastonbury) because it’s not communal: we all go elsewhere to shit, shower and shag*. The City doesn’t really notice The Great Escape is happening. I think of it as an un-festival. All us Great Escapers do it our own way and there is no ‘oneness’ in the way we share the music. That’s at once a shame and a relief. Here’s my account of day 1 of Brighton’s Great Escape Un-Festival**. As I saw it.

There used to be a rule about bands. If you liked them you’d say ‘I’ll buy the album’. I used to say that last century. Now it’s ratcheted down to ‘I’ll check them out on ‘MySpace’’. Even worse, now it’s: ‘meh, maybe spotify’.

Ocean Rooms! First venue. The Hoodlums from Southend gave lively fun. It’s always great to see a proper double bass on stage. Cursive were also amusing enough as we waited for thecocknbullkid and that’s who we were there for. The singer knows what’s she’s doing. Great frock and charisma. Channelling Aretha, she gives it lalldy***. But her band need to realise that loud isn’t best. Those three boys drowned out their diva in a tiny venue that needed a bit more subtlety. Thecocknbullkid isn’t just a bad name for this potential popular sensation, it’s a misconceived idea. The girl wins it. The chaps on guitar and drums shouldn’t look so bored. She’s way better than them. Ditch ‘em sistah and I’ll more than Spotify.

And so next to Komedia, and the Rumble Strips. These guys are an engaging six-piece. There’s a bit too much middle-of-the-road Kaiser Chiefs/Franz Ferdinand-ness for my taste. Not least because they do chirpy rock with a bit of Madness better. They’re clearly technically very good: when they harmonise vocally and chuck in a few crazy chords and stuff. Wow. The singer really gives it all live. On some songs you get a pair of keyboards and on others there’s trumpet and sax goodness. But what is totally remarkable about the sound? Alas, not much. Fellas: we agreed at the Waggon & Horses afterwards that you’re cleverer and better than what you do now. Break free. Competent but unrevolutionary.

I didn’t actually see Blue Roses at The Basement. I was there. I heard them from a corridor: prissy, pedantic staff didn’t much add to the ambiance. I reckon they’re probably quite good. But when a bottle of beer costs £3 and you’ve already had two before not being allowed in to the room where the music happens enthusiasm wanes. If I’m generous, I’ll blame that as the curse of The Great Escape.

Back to the Ocean Rooms. I’m listening to the Filthy Dukes**** on Spotify as I write this piece. It’s good stuff (if you need a Spotify invite I have some left). But what they do isn’t much enhanced by live performance. Apart from seeing two long haired chaps drinky drinky twiddling knobs, they may have just played their CD. They’re pretty good. They’re possibly very good maybe. I’m just not sure what the two great lumps of wood were for (they clunked them every now and again presumably to get a sample) but how much entertainment can you get from knob-twiddling?

I haven’t bought any records. Yet.

*So far I’m only professing personally to 2/3.
** The ‘un’ thing is an homage to the idea of an ‘un-conference’.
*** A Glaswegian term from way back, I believe. Lalldy: sang with real spirit and strength.
**** Update, Friday morning. On reflection, the chaps we saw may not have been the Filthy Dukes. Not sure who they were frankly and I spose it doesn’t much matter. But it further reinforces my reputation as Britain’s worst music reviewer.