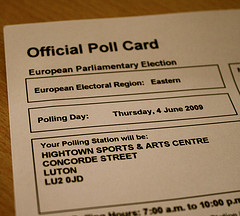 I didn’t receive my polling card for last week’s European Elections (we don’t have a county council in Brighton).

This is obviously not the end of the world. Anyone who’s on the electoral register can just turn up to the correct polling station and cast their ballot. But, frankly, this isn’t the point. Voting should be so easy.

About a dozen people I’ve spoken to since also said they didn’t receive a polling card. Some voted, some didn’t:

If we’re going to get agitated about low turnouts (and I think we should) I also reckon we need to look at the boring mechanics of elections and how they’re organised. I wonder if the authorities have any idea how many people didn’t vote because they didn’t get a polling card? Even if it’s a tiny percentage, or even a fraction of 1%, it’s disquieting. Not least because elections can hang on a handful of votes.

Most of all, I’m concerned that this issue isn’t even on the radar of the folk who organise elections. When I went to vote, I asked the staff to keep a note of the fact I didn’t receive my polling card and suggested they ask other voters if they had had a similar experience. The rather annoying chap at the polling station said that there wasn’t a mechanism to do that (I suggested pen and paper) and that the card had definitely been sent. He offered me various reasons why I didn’t have a polling card: it had been stolen, my letterbox wasn’t big enough or, rather insultingly, that I had received it and had lost it.

Voting is a precious right and anything that threatens it, even something so seemingly trivial as not receiving a polling card, needs to be investigated.