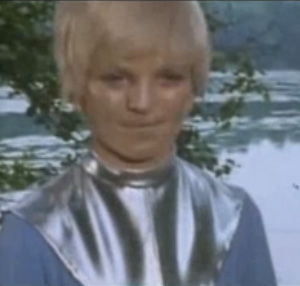 It’s amusing to think back to the notion of schools’ television when I was a kid in the 1980s. Whole classes would sit in front of a big telly and watch broadcasts live or on video. The video was much sought after, as I recall. Televisions were wheeled from room to room. Telly time was something of a treat even if the purpose was overtly and cloyingly educational. Dramas were followed with a session discussing the language idea introduced.

There’s plenty of schools’ television to remember. But the one that sticks out for me, is The Boy from Space. It was a fairly camp rendering of a tale that saw a blond, silvery boy arrive on Earth, pursued by some sort of thin glam rock policeman. And that’s about all I remember… except for the very evocative line in the theme tune that really scared me: “space goes on forever….”

Alas there isn’t much of The Boy From Space on YouTube but this will give you a flavour and maybe evoke some memories. I’d love to find the video that has the theme tune.

The scary thin man in the long coat

Round here we have definitely entered the “pointless walking for something to do en masse” stage of the pandemic.