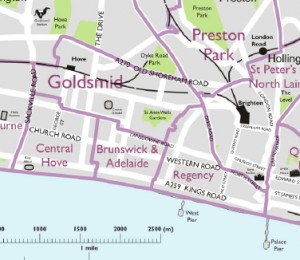 It’s a lot of fuss over a single seat on a city council. But the Green victory in Goldsmid offers a lens on the politics of this City-by-the-Sea. A Labour gain in Goldsmid was always a big ask in the current climate but then again a Tory hold was hardly a dead cert (the previous Tory Councillor was AWOL and forced to resign). The Greens had a mountain to climb too which did make it a fairly open contest. Hard campaigns were fought all round.

But the Greens did win. Convincingly. And it’s an intriguing victory for them. Goldsmid is their first gain from the Tories on the city council and their first in Hove. It’s easy to understand why they’re ecstatic. But I think they need to be more circumspect.

The key question is whether this victory represents momentum or a high water mark. I’m not sure. But I’m struggling to see where they’re going to win more council seats. They play well and have established their base in the city centre. Goldsmid isn’t quite as urban or trendy as North Laine, Hanover, Queen’s Park or Regency wards. But equally, it’s hardly suburban bordering as it does city centre wards with Green representatives. The Greens struggle to find support outside the Muesli Beltway*. Can the Greens make gains in wards like Patcham, Portslade, Stanmer, Moulscoomb, Saltdean or indeed Rottingdean? I just don’t see it myself.

And anyway, the city council isn’t their priority. Getting Caroline Lucas, the Green party leader, elected as the MP for Brighton Pavilion is the big win they’re eying. It’s worth noting that new Councillor Alexandra Phillips is a Green party employee having previously worked for Lucas in Brussels. Indeed, several Brighton and Hove Councillors are (or have been) on the Green payroll. I’m surprised that Lucas chose to spend polling day knocking on doors in Goldsmid rather than in Norwich (where the Greens are strong too) on the Norwich North Westminster By-election but it’s a clear example of their priorities.

The Greens couldn’t be more committed to winning a seat in Westminster and they want Brighton Pavilion. The Goldsmid victory and benign coverage from a hypnotised Argus is all part of that campaign. Doubtless local people will start to wake up to the fact that Brighton and Hove isn’t a Green passion but a vehicle. They are tough, even savage campaigners. But they are also organised and well resourced. But really, after so many years on the city council, what have the Greens managed to achieve for Brighton and Hove?

The General Election in Brighton Pavilion (especially since the withdrawal of Tory candidate David Bull) is a wide open battle between Conservative, Labour and Green. The problem for Labour and Conservatives is how you can campaign against a party that is largely un-scrutinised, untested, chameleon and willing to say pretty much anything. They are not honest about their high tax, anti-capitalist and often bizarre manifesto in local literature. The Greens rebuff attacks on the doorstep with “don’t you want to save the planet?” They play on emotions very successfully.

Will the Greens win the Westminster seat in 2010? Quite possibly. The Green vote is concentrated in the city centre wards in Brighton Pavilion and with a campaigner like Lucas and massive party resources they’ll be able to make a splash. Can they win more council seats in 2011? Maybe. But not enough to take control of the council in their own right and the noises coming from the Greens at the moment suggest that they don’t want to be part of a coalition.

Whether Goldsmid represents momentum or high water mark isn’t clear. But either way Green glee looks a lot like hubris. Maybe what the Greens need is power. Then, when they have to make decisions and stand by them, spend our money and explain why and then face re-election based on their actions and not words, we might see the Greens’ true colours.

*You know what I mean!

Disclosure: I’m a rank and file member of the Labour party in Brighton Pavilion. I hold no office or post in the party.