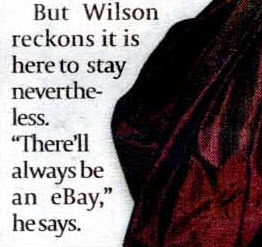 On the promise of a live link from thelondonpaper.com to this here my blog and a possible plug for me old book (Make Serious Money on eBay UK), I obliged a journo from The London Paper with comment and copy the week before last on the occasion of eBay UK’s Tenth Birthday.

I was present at the birth, after all, and enough of a media tart to hope I have something quotable to say. As ever, the material provided was much greater than material used and, you lucky people, here’s the full transcript of my jabbering in the hope that it is of interest to someone out there. It’s doing no good in my inbox, after all. A scan of the published article lives here.

The brief: Essentially I was wondering if you could tell me what, in your opinion, has made eBay stand out from the pack, how it has survived for 10 years and avoid the failure of so many dotcom start-ups around the turn of the millennium, and what you might imagine will happen in the future. You were there on day one: include a bit of info about what that first day and the build-up to it was like. Don’t suppose you remember what the first item sold was?

Dan Wilson said: eBay’s strength has always been the amazing, crazy, weird and wonderful things for sale: everything, literally everything you can imagine is up for sale on eBay. eBay is addictive and people pore over the site for hours and hours pursuing their passion or seeking out a bargain.

eBay transformed collecting. Before, it was car boot sales and collectors’ fairs possibly spending years looking for that elusive item. All of a sudden, you could buy from fellow collectors all over the world. It was revolutionary.

eBay diversified very successfully. Starting off as a second hand auction marketplace and becoming a place for everyday and mundane things: hoovers, saucepans, cushions. Buy it Now is the favourite way of buying on eBay now. Hundreds of thousands of business operate through the site, selling billions of pounds worth of goods every year.

eBay side-stepped the dotcom bubble bursting because it was light years ahead of the pack in terms of philosophy. eBay was the first Web 2.0 company, relying on buyers and sellers to lead the way with feedback and people power. eBay realised before Wikipedia or Youtube that the users are in charge and they chart the course of the business. Giving up control is vital on the internet.

It is also such a staggeringly simple idea: people trading with other people online. Lots of the companies that toppled when the bubble burst were absurd, niche or just damned crazy. eBay was always a cracking concept: a real ‘why didn’t I think of that?’ idea. eBay is also a remarkable business in that it has always generated profits since day one. Lots of businesses that went bust had never made a penny.

eBay’s having a tough time right now and facing increased competition from Amazon. Profits are down and there are lots of angry sellers. But eBay is a clever, dynamic company with a loyal community: there will always be an eBay.

eBay was already very successful stateside when it came to the UK in 1999. When we launched in the UK, we were working in a shabby, rented office like any typical start up. It was total chaos and we had no idea that what seemed like a very American concept would work over here. Lots of antique sellers and collectable traders were very sceptical about the internet and worried that it would do them out of business. The internet was risky and scary in 1999 to people who didn’t know it well.

As it is, of course, eBay has been a godsend to many businesses. Most selling in 1999 was to buyers overseas. Lots of buyers in America and Australia wanted to get their hands on a British collectables and that was the source of amazing early growth. Before PayPal, lots of international trading was done in cash. I sold stacks of Doctor Who memorabilia back then and I was always going to get dollars changed at the bank.

I think the first item sold was a CD by the Scorpions… but my memory is hazy. It was ten years ago…