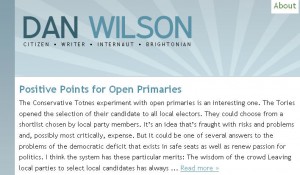 Have you noticed? We’ve tidied the place up a bit. Do you like it? Good websites are evolutionary. A tweak here and a tinker there. Every version is the iteration before the one that comes next.

A few weeks back I was chatting with my good chum Sue Bailey, AKA blogmum. Regular readers will know that she’s my preferred WordPress Whisperer. And not for nothing. We had both been thinking for a while that this site was in need of a tart up and so we individually scribbled notes before comparing them.

There were lots of items of a agreement, plenty of individual ideas and a massive list of nitpicks. But in broad strokes we agreed:

Surface more popular content, not just recent content.
My most popular scribblings were not on the homepage whilst some of the least interesting stuff was. And that was silly.

Make more of comments.
There is lively discussion and that’s valuable. We both wanted the conversation to be more visible.

Showcase the written word more effectively.
Text excerpts were previously too short and some of the rendering was skewed towards images rather than text.

General spruce up
There’s nothing wrong with just tarting things up a bit!

I must say I’m thrilled with this new regeneration. It’s very clearly the same site, it’s working harder and it looks a lot smarter. What do you reckon?