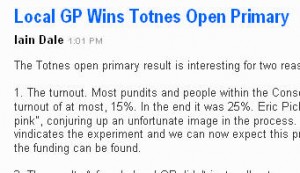 The Conservative Totnes experiment with open primaries is an interesting one. The Tories opened the selection of their candidate to all local electors. They could choose from a shortlist chosen by local party members.

It’s an idea that’s fraught with risks and problems and, possibly most critically, expense. But it could be one of several answers to the problems of the democratic deficit that exists in safe seats as well as renew passion for politics. I think the system has these particular merits:

The wisdom of the crowd
Leaving local parties to select local candidates has always struck me as a peculiar process. After all, being a member of a political party doesn’t necessarily mean you make the best decisions. Equally, longevity of association with a party isn’t necessarily a mark of quality for candidates. Small, committed groups might not pick a person who best reflects the constituency but a broader groups of electors outside the party stand a better chance. The crowd moderates the clique’s urge for philosophical purity and looks more keenly at their other attributes. Honest, decent people rather than hardcore politics geeks stand a better chance of passing the test.

Empowerment of the disenfranchised.
Millions of people in Britain are essentially disenfranchised. In safe seats, a monkey in a red/blue rosette will win whatever happens and yet if you vote the other way your vote is essentially pointless under the first past the post system. Giving these ‘lost voters’ a chance to choose the presumptive winner (even if the MP is not from their party of first choice) means that they do at least have a voice, and perhaps a stake, in participating and hopefully greater faith in the result.

Central party machine is less powerful
Labour and Tory activists alike complain about the influence that the central party machine can exert on selections and are keen to maintain their independence. An open primary very effectively prevents a candidate being parachuted in. Of course, there is an irony in that local parties have to be content to give up their own power in choosing only a shortlist to limit the powers of the central party to impose a candidate upon them. But I wonder if some local parties wouldn’t accept that compromise.

Open primaries are potentially invigorating. Where politics is stagnant, they can stir in some air. I’d be content if Labour adopted a system along these lines for, say, 10% of seats that are unlikely to change hands and can’t see any reason why we shouldn’t experiment with some seats for the 2010 election, especially with such an exodus of MP post expenses.