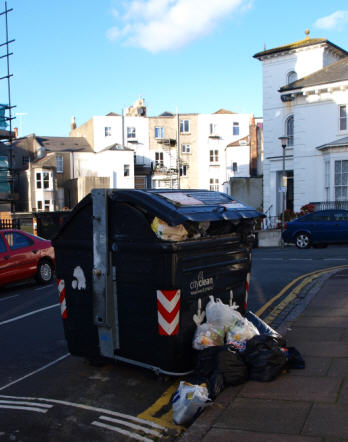 I love the Brighton Green Party. I constantly delight at their loquacity. Barely a day goes by in the blogosphere without a fascinating new viewpoint or opinion popping up for our delectation.

Here’s a summary of the most recent posts I’ve read and enjoyed:

– Green Leader Cllr Bill Randall ruminates about the butterflies in his garden.
– Cllr Amy Kennedy’s husband has carved a pumpkin with the Green Party logo.
– Cllr Jason Kitcat writes at length about the licensing rules at a local Sainsbury’s.
– Cllr Ben Duncan (and I had a lot to choose from) talks about the traffic lights at Oxford Circus in London and how by taxing junk food “there’ll be probably be (sic) a fall in the high numbers of Brighton residents suffering from depression.”

It must be fun being Green. You can complain and pontificate about anything you like. As long as it isn’t about anything important to residents in Brighton and Hove. Tedious little concerns like a strike by Refuse Workers, for instance. Even in the local Brighton Argus this past week, I haven’t seen a single Green Councillor speaking up.

Brighton and Hove’s pernicious Conservative council has tried to impose a pay cut on Refuse Workers in the name of equal pay. It’s bollocks and thankfully Labour folk have been out and about condeming the council, joining the protest and trying to solve the issue. Rubbish has been piling up for more than a week all over the city.

I had hoped to bend the ear of either of my two Green local councillors about the strike after the Service of Remembrance last Sunday at Old Steine. I was there but sadly neither attended. I may be a Labour supporter but Green Cllrs Rufus and Kitcat are my elected representatives.

Had they been there, I would have taken the opportunity to support the strike, condemn the Tory council’s inaction and urge them to use the backlog of rubbish to kick start a discussion about reducing waste. I have been personally shocked by the amount of waste on my street and I think being able to (quite literally) visualize the waste is a useful spur to reconsider the problem. There must be steps a committed City Council can take.

Some issues are ‘small g green issues’ that transcend party politics. But it seems like the local Green Party has gone to ground on waste and the bin strike (which has been temporarily suspended) and I’m curious to know why.

Answers on a postcard please, to the usual address.