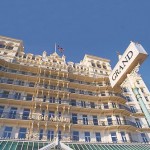 For a long time in Brighton Pavilion, Labour has been shadowboxing. We’ve had our own fabulous candidate Nancy Platts for two and a half years. The Tories chose David Bull initially and he didn’t really make a mark. The Greens have chosen Belgium based Caroline Lucas and she unsurprisingly continues to be largely absent (she’s an MEP based in Brussels). We don’t much care about the Liberal Democrats in these parts.

Last night the Tories chose their new candidate. David Bull dropped out to spend more time with his improbable excuse for withdrawing from the race. So, after the success of an Open Primary in Totnes, Brighton Pavilion Conservatives decided to have an open primary too. Except they didn’t. I agree with Cllr Jason Kitkat and call it a caucus: the Tories called a meeting at the Grand Hotel and all Brighton Pavilion voters were invited to attend.

But it all went a bit wrong. I called the published number several times and it rang out. I then emailed the published email address twice and that bounced twice. In the end, I got through and I was confirmed as eligible as an attendee. I chuckled: I’m a member of the Labour Party after all. I’m never going to vote for the Conservative candidate in the only ballot that counts.

In attending the caucus, my intention was to vote for the least attractive candidate. But yesterday afternoon I started to wonder why I wanted to go to a Tory meeting at all: don’t I have better things to do? Can’t I expect Conservative minded voters to make their mistakes all on their own? I suggested to the friend I was going to go with that we might as well just enjoy a libation or two down the boozer and she readily agreed. When we learnt that the 6:30pm meeting went on till nearly 10 we felt justifiably smug that we’d had the better evening.

What does this Tory exercise prove? I’ve written before that I can see some situations where a primary might be attractive. But I agree with most critics that primaries and caucuses do little to improve engagement with the electoral process and don’t address issues of diversity. This shambolic process with a meeting doesn’t even compare particularly favourably with a well attended selection held by a political party. The Argus reports 80 attendees. Nancy Platts ‘s selection had more than 200.

The Brighton Pavilion Tory experiment is truly the worst of every world and the worst possible advertisement for “open primaries”. A badly organised, poorly publicised meeting has selected a candidate who has neither the merit of being solely the local party’s choice nor an interesting and remarkable figure who appealed to a broad swathe of local people. It feels like an unauspicious start for the new candidate, Charlotte Vere.

Roll on the general election: we now know all the runners and riders. The only thing we can say with any certainty is: the next MP for Brighton Pavilion will be a woman. That’s good news. And more importantly, it’s all up for grabs. It’s gonna be a helluva general election down here in the City-by-the-Sea.