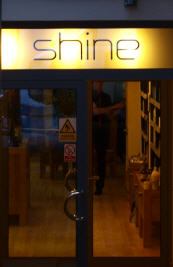 One good turn deserves another. I was the lucky winner of a cut and blowdry at Shine Hair and Beauty in a raffle at the Brightwest Twitter Meet-up back in September. Since they were generous enough to donate the prize, the least I can do is blog about how marvellous it was. Thankfully, I don’t need to lie.

I’m an eight quid at the local barber kinda guy. You sit down and flick through GQ for a few minutes, take the first chair that comes up and make a few half-arsed suggestions about what you would like and emerge fifteen minutes later, inevitably, with a short back and sides. Needless to say I was apprehensive about going to what I believe they call a ‘salon’. But what fun! I see the attraction now.

Shine’s Brighton ‘salon’ in Gloucester Road is lovely: homely, roomy and, well, shiny and stylish. Most surprising were the comfy chairs and big kitchen table with piles of mags and women having a cuppa as bits of foil did whatever mysterious work bits of foil do to hair. It was just like they were just at home. How relaxing.

Charles, an Isle of Wight native, was my stylist and spent (get this) fully five minutes talking about what I’d like doing. He seemed even more excited about the whole thing than me. Once we’d decided, Miriam the polymath receptionist turned masseuse gave me a superb and very relaxing head and shoulder massage before I had my hair washed and shampooed. And then to the chair, a fairtrade coffee and the main event.

Who knew that a haircut could be a pleasant experience? I had a very enjoyable conversation with charming Charles and he never once mentioned holidays or football as he deftly clipped and trimmed my barnet. And what was particularly nice was the privacy. It’s once thing having an indulgent time but quite another to do it with people peering in through the window as if you’re a goldfish. Shine’s Salon is set back from the pavement, so I relaxed knowing noone was peering in and extracting the michael.

From a business perspective, Shine is cocking a snoop at the recession. Established in 2007 by Jonathan Harries, it was an independent enterprise formed to take his two decades experience as a hairdresser in a new direction. In particular, he wanted to reflect his environmental concerns and also provide a stylish and comfortable salon experience. And it must be going well: this year the salon moved to premises and expanded the services it provides. The bigger salon means that Shine now offer spa treatments too.

And best of all, my newly coiffed hair passed the test. Normally, an eight quid cut goes unnoticed. But my gleaming new shiny Shine do prompted a girl down the boozer that I’ve fancied for ages to comment that it looked “really nice”. That makes it officially the best raffle prize and the best hair cut I’ve ever had. Next time, I’ll just have to pay.