I wrote this last spring for a recruiter regarding a job I wasn’t really suited to and didn’t get. The references are a bit old and it’s a bit more of an essay than I would like but as a braindump it sums up some of the ideas I hold regarding social media and, seeing as I hate wasting copy, I thought I’d publish it here. Some of you may also find it interesting!

Past
It’s wrong to characterise what’s commonly called ‘social media’ as something which has emerged in the past 5 years or so and it’s worth remembering that many of the characteristics of social media have been prevalent online almost since inception: forums, chatrooms and newsgroups have a long heritage, the first wiki was born in 1995, the Cluetrain Manifesto and Friends Reunited (the first online social network to find a mass Market in the UK) launched in 1999 and blogging in a recognisable form has existed since the mid-90s. In many ways, the social media values of transparency, conversation and user value are the values of the World Wide Web itself.

Present
So, it’s not really new. Two developments have brought social media to the fore more recently. Firstly, the mass use of sites such as Facebook, Bebo, Myspace and Youtube (to name but a few) represents ‘normalisation’ so using social media tools is no longer niche (that said there is still a great divide between the use of ‘normal’ social media and more advanced services). Secondly, business is definitely taking notice and knows that there’s an opportunity to be grasped and exploited, even if there is some confusion about what that opportunity actually is.

And yet, according to HitWise only 10% of UK traffic is going to social media. Twitter, despite the hype, and massive growth in recent months only takes about 0.67% of the total. Facebook only recently overtook eBay in terms of visitors. Often ignored in the space are the large media organisations, notably the Guardian and the Telegraph. The BBC, in particular, must be the most influential (if not innovative) player with widespread use of blogs, forums, podcasts and UGC. Moreover, through the promotion of these features on air, the Beeb has been a vital educator, introducing millions to social media.

It is tempting to overstate the importance, influence, and revolutionary nature of social media. I believe that social media can be transformational to individuals and organisations and has the power to enhance business, politics and society. However, its influence is less in the technology itself but rather in the ‘mindset shift’ it can enable. Using Facebook or Twitter in itself isn’t enough. The benefits come from embracing the social media values of conversation, transparency, collaboration and providing greater value to users/customers.

The Curse of ‘Cool’
The net industry, pundits and tech journalists are prone to be inward-looking and blinkered, concentrating on niche products, cool and new technology whilst sneering at the commercial success and popularity of other sites. It’s notable that Martin Lewis with his MoneySavingExpert.com community (which has active forums and relies on UGC) is enjoying phenomenal success and yet is virtually ignored by the netocracy despite representing ‘best practice’. Darling of Web 2.0 circuit Dopplr is a miniscule service for frequent business travellers, and whilst beautifully engineered and delightfully designed, it shouldn’t be held in higher esteem than profitable, less cool brands.

Equally, the media and industry are prone to consider social media a vital link to younger audiences when the figures suggest otherwise. Contrary to received wisdom, more than half of the MySpace and Facebook audiences are over 35, and both have more female users than male. There is also a risk of transposing UK/Western trends on the rest of the world. Social media usage in Asia and South America (to name two massive and growing audiences) is completely different to that in Britain or USA.

One of the biggest risks of using social media, specifically as a marketing and communications channel, is the the reason then failure seems motivation. If ‘being cool’ or doing it ‘because we must’ is likely.

Future Growth
Obviously, the social media audience is going to grow in the next few years and the sophistication of the audience is going to increase too (some say that ‘digital natives’ are so savvy that they blank out commercial messages altogether.) The recession will probably see people using the net more as they go out less or try and save money online. However, as many social networks struggle to monetise, it seems likely that businesses promoting themselves online will be squeezed to cough up more. This will mean that honest, inventive marketing will be required if social media is to be a transformational channel.

Social Media and Media Agencies
Any organisation working on marketing or branding needs to have an eye on social media. It cannot be ignored but neither should it be hyped or peddled as a panacea. It’s interesting to note that many businesses making successful strides are SMEs or individuals. Stephen Fry is a good example of someone who successfully enhances his personal brand online using not just Twitter but blogging and podcasts. Moo.com and 37 signals use a rack of options to communicate with their very loyal userbases. This is surely because smaller organisations have an authentic and compelling voice.

Some bigger brands have been successful too: Dell provides discounts to Twitter followers. Walkers ‘Do us a flavour’ campaign has successfully integrated social media with traditional offline marketing and a great concept. Innocent Smoothies practice ‘radical’ transparency and amplify their trustworthy, chatty brand online with their blog and Twitter feed. BT communicate directluy with customers via @btcare on Twitter.

There is great value in reaching out to smaller communities where opinion formers and early adopters are found. Equally bigger, focussed communities (MoneySavingExpert springs to mind again) offer a valuable audience. But the tendency is to ‘broadcast’. Work I have done with PR people is instructive. PRs like control, and, even the most decent, have key messages and a script they don’t want people to stray from. Bloggers, for instance, are often perceived as dangerous, unprofessional and untrained: read as ‘harder to control and influence than press journalists’.

The Client Challenge
From work I’ve done with bigger brands, I’d say that there’s lots of keen, but not enough willing. To make social media marketing work, it’s necessary to give up some control and allow people a voice. There is concern about criticism. Bigger organisations are also not built to take part in a conversation. Legal approval, a nod from the Head of Marketing and screening by investor relations does not make it easy to respond. Brands and organisations have to flex a little to make social media forays successful. Part of a media agency’s skillset needs to be persuading and coaxing that change out of clients. 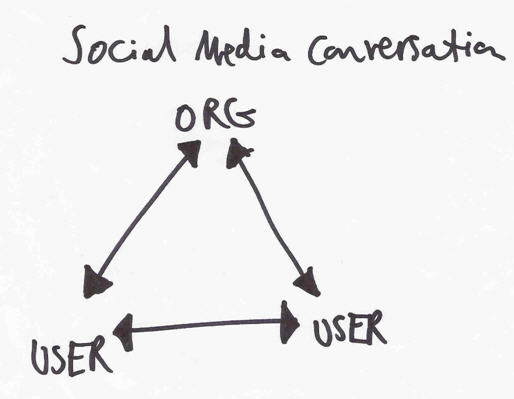 Social Media isn’t a ‘Dark Art’
Within a media agency, the social media offer opportunities that can and should be integrated in campaigns and projects. Indeed, sometimes social media can be the lead channel but treating it with too much reverence, mystery or magic is to overstate its possible impact.

To integrate social media effectively the people within an agency, at all levels, need to be conversant and confident users. It should be normal and every day. Social media should be on the minds of everyone during all stages of the creative process. It shouldn’t be a ‘plug-in’ or a specialism limited to a few individuals. When an agency and its people are successfully consuming and conversing using social media with the same ease as TV, radio and newspapers it can effectively sell the benefits to clients.