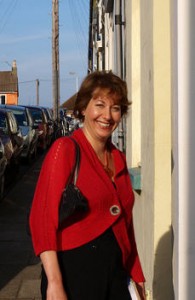 I’ve been out and about canvassing for Labour on the doorstep the last few weeks. Anyone who’s done it before will attest to the amusing things you see and hear as your peek into people’s lives and homes. These ones tickled:

“What election is it? Oh, a General Election. I thought we hadn’t had one for a while.”

“I voted Conservative all my life until the Iraq war. Blair had balls. So I started voting Labour.” (Surely the only person who did?!?)

“You say the Tories. That’s the same as the Conservatives, isn’t it?”

“I’m not voting Green. They’re a bunch of hippies. I used to be a hippy. I don’t think hippies should be in charge.”

“Oh yes. We’re voting Labour. Everyone’s so mean to Gordon Brown. I feel a bit sorry for him.”

“I vote LibDem: David Lepper has been a brilliant MP. I always vote for David.” (David Lepper is Brighton Pavilion’s retiring Labour MP)

A Labour canvasser reporting on how a household were voting: “He’s Labour and She’s a Tory. I’ve never understood how these mixed marriages work.”