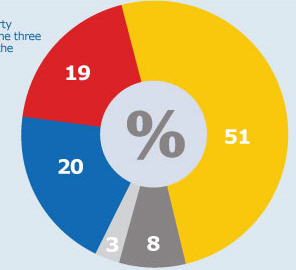 We’re staring a hung parliament in the face. It’ll be the first one in my lifetime (although not the first minority government: remember Major in the dog days of his administration) and it will surely be the first of many. The thirst for electoral reform is growing and that is a good thing. Proper PR will doubtless be the prerequisite of any LibDem involvement in the next government and that’s looking like a dead cert right now.

It’s just wrong that a party could come third in the popular vote and still get the most seats in the Commons and determine who the PM is. If the opinion polls are to be believed (and I’m pretty cautious about this Clegg surge), we’re looking at a Parliament that doesn’t fully credit the third party with seats equivalent to the popular vote and massively inflates the top two parties.

Even if we’re heading full speed towards electoral reform, what does that mean? There is a choice of systems. Even agreeing on a proportional system could be tricky. Personally, I value a solid constituency link and don’t much like party lists. Labour officially likes AV+ as I understand it, but that’s not strictly proportional. But take YOUR choice.

My point is: there’s a massive argument to have about reform of the voting system. And before we get to a consensus, it will likely get very boring and technical. So start thinking about exactly what system you want now. Impress the geeks.

Just booked a hotel in Germany and wrote as my special request that I'd prefer to speak German. They wrote back in English 'We will be pleased to arrange this for you'