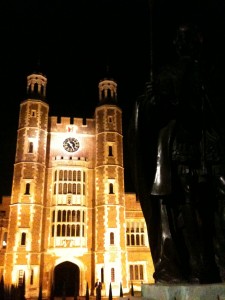 I can’t generally do name dropping. Not least because I don’t have names worthy of jettisoning in public. And I obviously shy away from playing the posh school card (for so many reasons). But this tickled so much, that I have to share.

I donned black tie and headed back to the alma mater last Saturday evening for a dinner. They’ve never asked me back before for such a do and seeing as I left in 1996, I was curious enough to attend.

Thankfully I resisted my inner Wooster and didn’t throw a single bread roll despite the fact that at least 3 former Conservative cabinet members were in the house. But I certainly did manage a hearty jeer when one crusty after-dinner speaker described Attlee’s post-war Labour governments as “over –esteemed”. << FUCK OFF.

But as I left, I accidentally encountered Douglas Hurd in Eton’s exquisite fifteenth century School Yard. And it was too much fun to resist. I had to say hello under the gaze of the Founder’s statue:

– Sir! I’m Dan Wilson. Very pleased to meet you. (Hand outstretched in greeting)
– Hello. I’m Douglas Hurd. (Shakes hand.)
– I must confess, Lord Hurd, that I’m a member of the Labour Party. An enthusiastic supporter in fact.
– Oh well. (He seems amused.) Who are you supporting as leader?
– Not quite sure yet. But erring towards your successor as Foreign Secretary, David Miliband.
– I see. (Pauses.)Why is that? (In those deep velvety tones I recall from childhood.)
– I think he offers the best hope of getting your lot out of government.
– (Pauses) I’m not sure. You should look again at his brother Ed.

And that was that. But as we said cheerio, outside School Office, he enthusiastically said that he couldn’t wish me luck, as he tottered off to his digs. I assume he was staying with the Provost, William Waldegrave. I got the train back to Brighton from Slough.

*Does he? Does he really? No. He was saying that I should think about it. It may have been misinformation, after all. He backs David Cameron. But it’s a fun title.