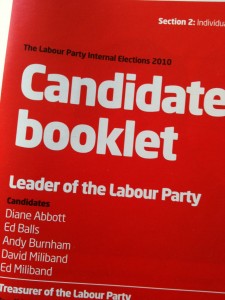 **NB: I wrote and published this before the results of the Labour leadership election were announced.**

It looks like there will be a bit of a discussion about how Labour elects its leader in the next few weeks, especially if Ed Miliband wins. I don’t propose to explain it (not least because I’d get something wrong) but you probably know the basics: three electoral colleges (MPs/MSPs/MEPS. Labour rank and file, the unions and socialist societies) using an AV transferable eliminating ballot.

To get ahead of the debate I want to make two small, relatively arcane points I haven’t heard much about. For the record, I think we need to look at changing the system, in particular the size of the elected members’ influence seems excessive. The New Statesman has a good piece noting that “the vote of one MP is worth the votes of 608 party members and 12,915 affiliated members. The vote of one party member is worth the votes of 21 affiliated members.”

But it’s a little more complex than that. An MP will have that ‘supervote’ but can also have a party member vote and likely a Trade Union vote or the like too. They can actually vote in all three of the electoral colleges.

Secondly, it is also actually possible to have multiple votes in a single electoral college. If, say, you were a Labour Student, part of LGBT Labour, in the Fabians and the Labour Animal Welfare Society, as well as being a member of an affiliated Trade Union, you’d actually have 5 votes in the third electoral college. Of course, these are diluted votes. But it doesn’t seem entirely right. I know plenty of people who have had 4 votes (and more) in the election.

Wasn’t that interesting? Remember, you heard it here first.