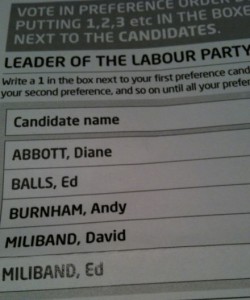 As a member of the Labour party, I have felt surprisingly unengaged with the Labour leadership election. I guess I was a bit tired after a tough general election (that I worked tirelessly for here in Brighton) and also I had to concentrate on some other projects. That said, I did go to events down here with both Milibands and also attended a garden party for Ed Balls in Hove. I also read Andy Burnham’s excellent manifesto “Aspriational Socialism” (although I didn’t much care for the title) and loved it. Abbott? Well, I wasn’t that bothered. From what I hear, she wasn’t that bothered either.

So, on my ballot paper my rankings were. (And it was a virtual ballot: I voted online.)

Why? I’m one of the “heart says Ed, head says David” brigade. I am personally not convinced that the coalition will last for the full five years and we need to start preparing a plausible programme for government (and maybe a minority government). Either way, we need to be a serious possible party of government at the next general election. Labour has drifted since May and whilst Ed M’s politics are closer to mine (his living wage campaign is exactly right) we don’t have a gap year available for him to find his feet. David will hopefully hit the ground running and has more gravitas. That’s why I voted for him as my first preference. We must win next time. He’s the best choice for that. I don’t really buy all this “red Ed” nonsense.

But I think the election campaign for leader has been useful. It’s good to reflect on what went wrong and what we need to do. That’s why I hope that Balls and Burnham are big hitters at the top table in the new shadow cabinet. It’s been good to learn a lot more about both men. Balls is a bruiser and noone else is doing more to attack the coalition government, in my opinion. I have been very impressed with him. Burnham is a thinker and a tremendous champion of the NHS who I want to hear much more from. I hope that we were essentially backing and solidifying a top team, not just a leader.

Which takes me to Diane. Is she a showbiz personality or a politician? I hope she makes up her mind because I think she’s got a lot to give. It’s time for her to get off the sofa with Michael Portillo and head to the front bench and start knocking some heads together. She’s a good communicator and we need her. Party first please, Diane. Just this once. We indulged your challenge and I think there’s a quid pro quo.

So what happens now? We’ll find out in a few hours. The next leader of the Labour Party will be a Miliband. But will the next Prime Minister?