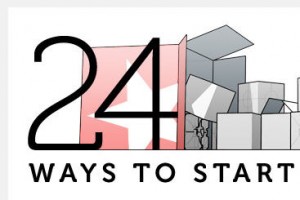 In December I was invited to write a blog post for a site called “24 Ways to Start“. A sort of advent calendar for entrepreneurs. Here’s what I wrote:

My first start-up was eBay.co.uk way back in 1999. eBay was already a public company and also profitable. International expansion was eBay’s focus with Germany and Britain first. I was an LSE student on an hourly wage.

The mission from the mothership in San Jose was clear. Make it happen now and account for every penny. In that age of dot.com largesse, eBay was stingy. No Boo.com extravagance for us. Our crap office was embarrassingly ill-equipped. They were ever so tight. Quite right too. We had to have all the hunger of a real start-up.

But we had something most start-ups don’t have: transplanted US executives bringing a “playbook”. Mythical and unwritten, they cited it daily. The yanks (all male MBAs replete with khaki slacks and blue Gap shirts) couldn’t see past it. Like aliens, they left as mysteriously as they arrived every now and again. They sought online banner deals with AOL, Yahoo and the like and they were dogged. They wanted to replicate the US success by repeating the same moves. The UK was just another planet.

We Europeans wanted a bit more though. We demanded changes to the platform for our local markets which were rarely forthcoming. Website changes were slow and reluctant. For the most part, I was on the blower, or out and about each day like others, building eBay one Del-boy at a time. I must have met or spoken to 100 stamp and coin dealers that first month with eBay. Plenty of people thought buying and selling on the internet was a crazy idea back then. We feared QXL. Yes, really.

But everyone shared a tremendous sense of urgency. To this day, I have never worked with a team that was so focussed on getting something worthwhile and amazing done every day. Get a result. Now is best. That was the idea. Report some progress. And every day in that summer of 1999 at eBay did end with a gaggle, where everyone was expected to report a result. Critically, it wasn’t an exercise in bullshit or evasion. The camaraderie and enthusiasm was such that you really did want to tell everyone about something brilliant you’d done.

It’s perhaps a blindingly obvious thing to say, but I’ve subsequently found it overlooked in other start-ups. As you look at the horizon, amid the chaos to build something brilliant tomorrow and build a 6-month strategy, can you honestly say you’ve had a good day today?