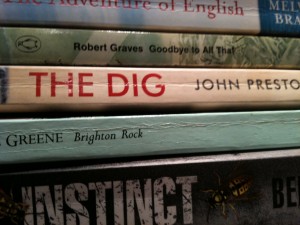 (I’m sticking to my 2010 resolution to read a book a week. Here’s what I read in January 2011. And excuse the tardiness, I’m clearing out scribbles that I haven’t blogged yet.)

Instinct, Ben Kay. Insects. Bloody big insects and bloody thousands of them. I grabbed this in December because I’d met the author at a party and promised to read it. It’s a thriller textbook that had me gripped for several days. American military scientists have developed genetically engineered insects to deal with the Taleban and other threats. It all goes wrong and our reluctant heroine, a British entomologist, is called in to sort the mess out and it’s grim. So many delicious and disgusting details and twists leave you (on occasion) recoiling in horror. This book is the product of a seriously sick mind and that Ben Kay seemed like such a nice man over champagne and canapés. And the ending is left open for a sequel…

The Dig, John Preston.This is a charming bit of fiction that really shouldn’t work. As the Second World War looms, the legendary Sutton Hoo archaeological dig commences. It’s delightful to be a reader knowing exactly what they will find and yet reading of the uncertainty of the protagonists as they excavate the mounds and scrape away the soil of one of Britain’s most significant historical sites. The clever device of telling the story from several different points of view brings the book alive. It’s so beautifully written, so gently told, that I challenge anyone not to adore it. It should be a film. And it would be better than The King’s Speech. The most tantalising aspect of the book are several loose ends untidily left hanging. Rather like archaeology, many questions are left unanswered.

The Adventure of English, Melvyn Bragg. In another life, I would have been a linguist. My response, when anyone asks me why I haven’t mastered a foreign language is, not entirely joking, that I haven’t finished learning English yet. I love the nature and history of language and this book is a surprisingly detailed (although not an academic text) survey of the English language. I rattled through it quickly and it left me hungry to know more. Bragg is right to treat the story of English as an adventure and he maintains a good pace in a subject that could easily be claggy. My only criticism would be the sometimes overly personal asides he makes and it is perhaps a little bit too long. But nonetheless, this is a highly readable survey and I can’t suggest a better alternative primer.

Brighton Rock, Graham Greene. As a sort of prep for seeing the new film, I thought I’d dust off the original classic. It’s just brilliant. Not only is Brighton captured in such detail but we get a genuine sense of being here in her raffish thirties heyday. There isn’t much plot in a lot of ways but the characters are so rich and the suspense palpable.

Greene’s prose is surprisingly sparing, almost impressionistic at times. As Pinkie teeters at the edge of the cliff, about to fall to his doom, Greene doesn’t describe it in detail but he packs so much into a few paragraphs. I don’t want to call it bleak, because Ida Arnold is a shining beacon of hope, but it is dark. A classic Greene study into the nature of good and evil.

Goodbye to all that, Robert Graves. I’m appalled that I hadn’t read this book properly before. I’ve used chunks of it as evidence in various history studies over the years (including my degree) but never read the whole work. It’s a personal memoir of the impact that the First World War had on Graves and the world he grew up in and which was subsequently swept away. It suffers from stilted, noticeably old-fashioned prose at times but it’s an illuminating survey. His account of life in the trenches just reinforces the view that the war was utterly futile chaos. Graves does a good job, in particular, of drawing out the distance between the home and western fronts as well as highlighting the hypocrisy of the top brass and the politicians back home. Graves is sanguine but the war evidently scarred him. That’s worthy of remembrance in itself, especially because that generation has now left us.