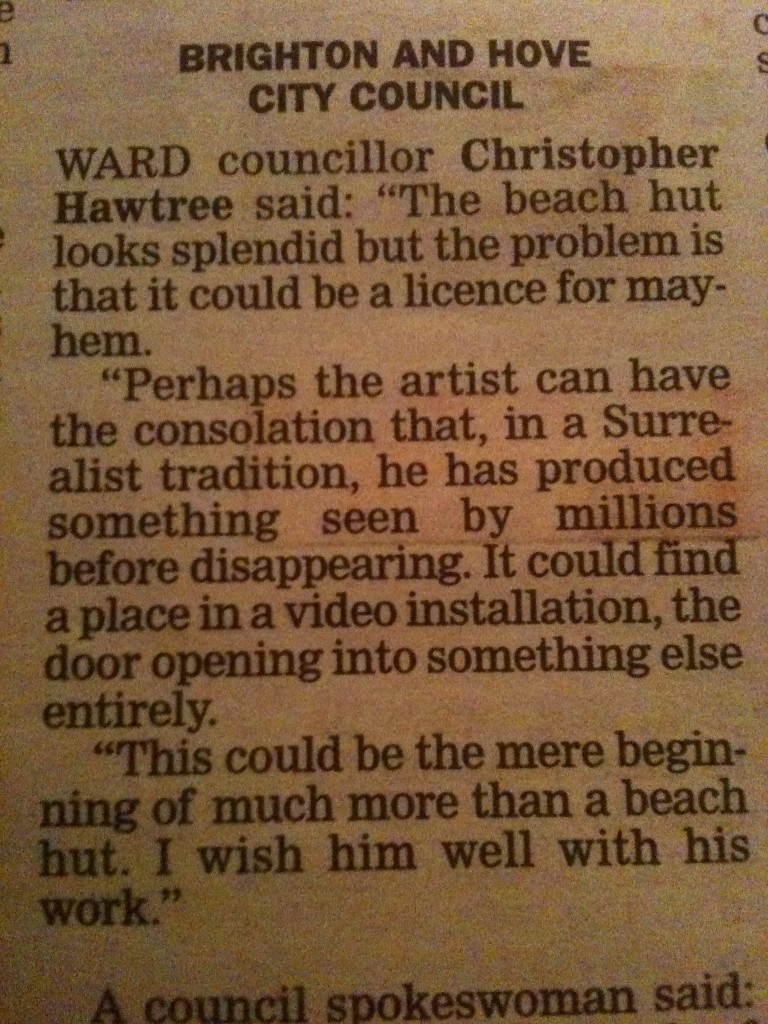 One of the great surprises of the City Council elections in Brighton and Hove in May (Yes, yes, the ones where I got absolutely thrashed by the Cllrs Kitcat), was the victory in Central Hove ward of our very own local eccentric Christopher Hawtree. Needless to say, when I call someone eccentric, I mean it as a compliment.

I offer my admiration today for a particular comment he made in The Argus. An enterprising chap has painted his beach hut. It’s not within the rules and I couldn’t care less. It looks marvellous. But Councillor Hawtree’s comment is brilliant. I’ve snapped the clipping for your delectation.

Hawtree’s comment is delicious and typical. Hawtree is a Green but I have enjoyed sparring with him over a pint or two. We share a passion for literature, architecture and ephemera. I think he also shares my love of H.G. Wells. And it is good to know that the politician is as real and true as the man. The above quote is exactly him. I can hear him say it. That’s rather unusual these days were media comment is polished and scrubbed and sanitised.

There’s one particular issue I find disagreement with Councillor Hawtree on, and that concerns Brighton Library. His argument (and I boil it down here unfairly) contends that there aren’t enough books there and even fewer plug points. I counter with agreement regarding the plugs but suggest that no library has enough books. You can never have enough.

Brighton Library has a perfectly good municipal collection. It isn’t a university collection. We have two unis in town and their collections are alright. Sussex amuses me enough. But then I have been spoilt. The BLPES is superb.

I rather value that there aren’t too many laptopists tap tapping away in the library but do also realise many people don’t have a workspace at home. I often use the library to work in but we could build a highrise in this city full of free deskspace and powerpoints (with free electricity) and it still wouldn’t be enough. I take heart from the evidently well used sections for kids and teens.

But it’s great to have a champion of libraries on the council beavering away. They need all the friends they can get and they immeasurably important. My point is that we need more people like Christopher Hawtree. He won because he is a tireless campaigner. He knocked on hundreds of doors, he found thousands of signatures for his library petition and he really cares for this fine city. But I rather worry they don’t make ‘em like him anymore.