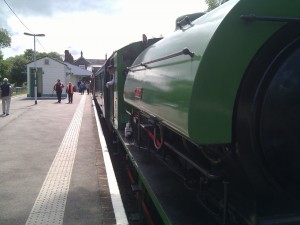 I do like going for a ride on a steam railway. Chuff chuff chuff poop poop. And last week the chaps went on an excursion to the Spa Valley Railway. It’s not the best known of the so called heritage lines. (I really hate that phrase. Almost as much as I dislike the term “cherished numbers” for personalised car number plates.) But it has one very real merit in that you can easily get to it by train. There is something wrong about getting in a car so you can then get on a steam locomotive.

The service travels between Eridge and Tunbridge Wells West and both are on the rail network. It takes around an hour to get there from London. And the the journey time is a bit more from Brighton. A jaunt on the Spa valley line isn’t a long trip, and the scenery isn’t the the most picturesque but it has genuine charm.

And then there’s the other benefit of not taking the car. How jolly it was to sup a pint of Hepworth’s Pullman from the bar car as you pootle through the countryside! And for a bit more of the same, we retired to the Huntsman pub for lunch and that certainly didn’t disappoint. Rah.