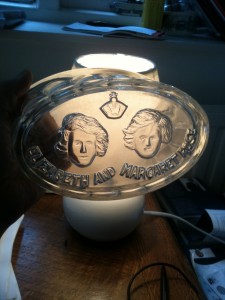 I picked up a thing the other day in a charity shop and I can’t really find anything about it online. So I throw it over to you. Do you know anything about this glass jelly mould with the images of Princess Elizabeth and Princess Margaret Rose on it?

I intend to sell it on eBay, so I asked that veritable fount of knowledge on glassware and curios, Lynne Clark aka Josordoni on eBay.

We came up with a working theory. It’s likely contemporary with the young princesses featured on the jelly mould. We think that dates it during the second half of the 1930s. It’s unlikely that such a frivolous item would have been produced in the austerity of war. Lynne came up with an occasion when such a thing might have been used: King George VI’s coronation on 12th May 1937.

It’s not hard to imagine street parties in 1937 replete with such jellies. Educated guesses, for sure, but still speculation. Does anyone have any better ideas? Calling all Royal Memorabilia and Kitchenalia specialists!

The pictures in this post will give you an idea. I’ll do better ones when I list it on eBay. By the way, I’m not listing it on eBay til September. The August bank holiday weekend is the nadir of eBay’s year trafficwise. I want eyeballs!