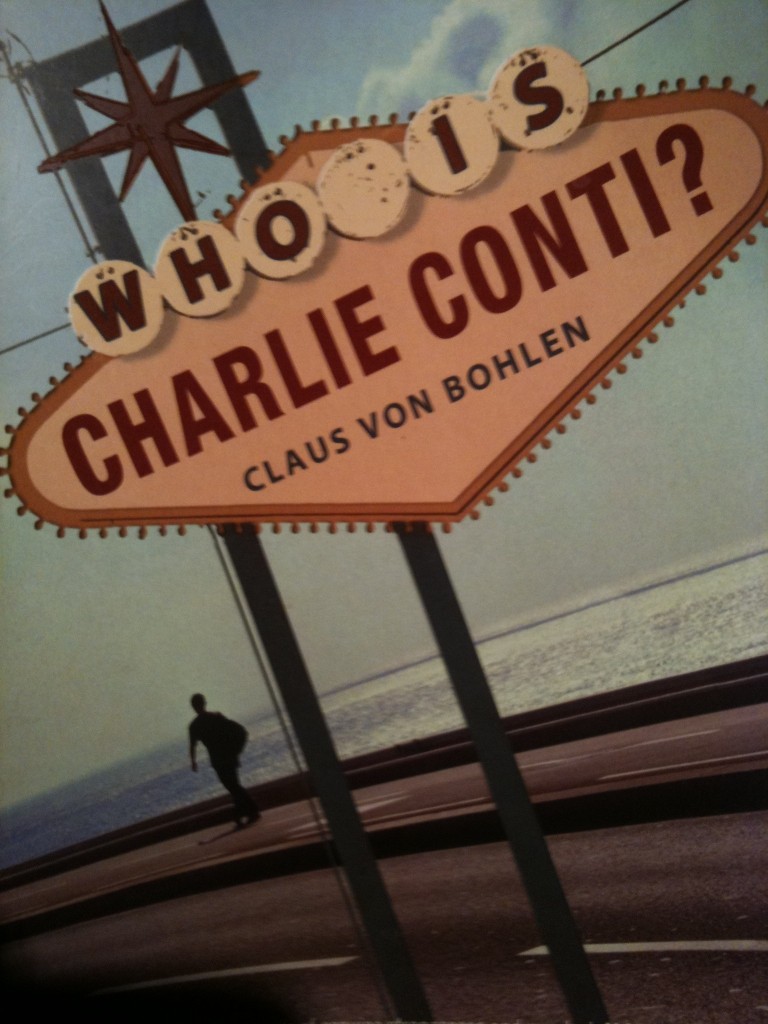 Who is Charlie Conti? is the accomplished debut novel from Claus von Bohlen. Charlie Conti is alone in the world and in possession of a great fortune. His mother is dead, his sister is in a home for the disabled and he doesn’t know who his father is. Moreover, he doesn’t have much of a sense of his own identity.

So he sets out to find it, only to gradually realise that his own naivety, isolation and wealth make him the perfect victim for identity theft.

Von Bohlen maintains an engaging pace, with a keenly crafted plot and a slow reveal, by drawing together vignettes from Conti’s past to help us understand how he comes to be penniless in a Nevada diner waiting for an FBI agent. There is genuine tenderness and insight into Conti, even if we don’t every really understand him. Ray Celador, the conman, is richly drawn, plausible and likeable.

The road trip aspects of the novel draw unabashedly from, and with direct reference to, Jack Kerouac’s On the Road. But it’s impossible not to draw comparisons with Catcher in the Rye and also, less directly, Fear and Loathing in Las Vegas. And why not? The great American novel is a rich seam to mine. Conti is an outsider, bemused by the US, and the reader is encouraged to look at the American dream anew.

The book does have some flaws. The narrator’s preppy, Holden Caulfieldesque voice slips here and there and von Bohlen’s own english peeks through. The portraits of american landscapes and cities, coast too closely to caricature sometimes, even if they are richly drawn. The takes on LA, Mexico, the big country outside Vegas and New Orleans are enjoyable but lack grit. The book’s about the descent from privilege to nobody, and yet there is sense that Charlie Conti may actually enjoy this rather too much.

The backcover calls Who is Charlie Conti? a “thriller with a literary twist.” A bit more thrill (a bit more) would have been welcome. It’s gripping as is, but more bangs, perhaps even a denouement with the enigmatic Ray Celador, would have made the tale more compelling. But that is a quibble: there are twists and chicanes, and the ending is unexpected. It’s tantalising that the book’s title question does, essentially, remain unanswered.

Who is Charlie Conti? is a gripping read and perfect for the holidays (especially if you find yourself on the sands of the Mexican Gulf) and I’m looking forward already to reading von Bohlen’s next novel: To Greet the Sun.

Disclaimer: Claus is a friend from school. So close in fact, that I haven’t seen him since. :O)

If they want to meddle with the early evening TV schedules for one of their press conferences (which she seems oddly obliged to tune into), my mother is vocally of the opinion that they could show some respect and turn up on time and preferably keep it brief.

In partnership with @SumUp, @e_nation is launching a three-month campaign: Hello, World – to deliver support to make the most of the economic recovery.

Here’s what you can expect from the campaign:

Can you believe we're entering our 2nd year of March? March has been the longest year ever.

That magical time when John Redwood sang along....

Sad to see Labour in the UK failing to elucidate a solid economic position at this time.