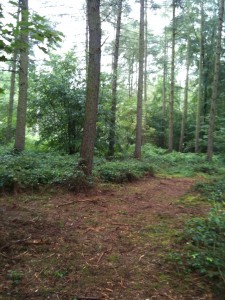 Sue Bailey was buried on Thursday. She was a close and dear friend to me for many years and I was privileged to attend her funeral. Let me share some reflections, for those who weren’t there. It was a small gathering. Eleven people. Mostly family. It was raining.

In woodland, near London, there is a burial park. It is serene and natural. It is, quite simply, a forest where people are buried. There are no stone memorials. It is unspoilt and, in due course, when we are all gone, it will just be forest again.

In that wood there are some buildings where people mourn and say goodbye. The buildings are simple, dignified and non-religious. They are made of glass and wood.

We gathered in one of those buildings to say farewell to Sue. Words were spoken, music was played, tears were shed. We all remembered the woman we missed already. We looked upon her wicker coffin and celebrated a life cut short. I wondered whether we could have avoided being there at all.

As I half-listened to the celebrant, and was invited to reflect with the music, I found myself looking out into the woodland through the windows. It was tipping it down. But still the birds flitted from tree to tree. They were Blue Tits, or the like, I’m no twitcher. The birds were many and lively. I took joy from that: it is a woodland full of life. I wanted one of those birds to be Sue’s spirit finding freedom. But I don’t believe in a world like that.

And soon after, in the pouring rain, we walked under umbrellas to Sue’s final resting place. Slipping along the muddy pathways in the forest, we followed the pallbearers through the trees. Bracken covered the mound of clay soil that would soon fill the hole we gathered around. With a few more words and a lot more tears, our friend was lowered gently down. The rain didn’t stop.

And when it was done, we paused for a fleeting moment by that hole before walking from the forest. I wonder if I will ever return.

And then to an old pub. Beer, tea, sandwiches and laughter. So many lovely stories. And tears too. I met her family. Kind people. The rain didn’t stop. The rain kept falling that day. I’m glad it rained.

I’ve struggled to make sense of anything in the past few weeks. But I do know it was good to say farewell to Sue in the way we did. I will miss her so much.

On Thursday, in the wood, as I walked away from her grave, I stooped to pick up a muddy pine cone from the forest floor. I wanted a souvenir and it was an obvious keepsake. The pine cone was damp when I touched it. Like a wooden bullet, it was hard and clenched. I left it on my desk when I got home.

When I sat down to write these words a few days later, it seemed odd that the pine cone was dry and open, like a flower. Why was I surprised? Life goes on.