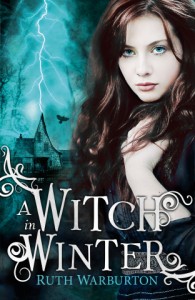 A Witch in Winter is Ruth Warburton’s debut novel and the first of a trilogy centred around the reluctant teenage witch Anna Winterson as she struggles to discover her heritage and the nature of her mysterious, magical powers.

Anna and her father have moved from London to the southern seaside town of Winter. A quaint and old-fashioned community replete with salty seadogs, meddling mums, picturesque harbour, wobbling sea defences and an ancient castle. Anna not only has to struggle with settling in at a new school far away from her friends, but within days of arrival she has accidentally discovered her latent powers and enchanted the school heartthrob, Seth.

Her chaotic, sometimes accidental, spell weaving draws the attention of the friendly local coven and the more sinister witching authorities who have spies everywhere. The scene is swiftly set for a tumultuous struggle between the different witch factions that will bring chaos to Winter and test Anna’s love for Seth.

A Witch in Winter is one of those YA (young adult) books that are seen by many to be the saviour of the publishing industry. As observers will know, magic, vampires and the like are the crucial elements of these books in a post-Twilight world. And whilst Warburton’s book has witches and magic galore, it is also intelligent enough to examine the nature of love and attraction in a perfectly sophisticated way for a YA book. Let us not disillusion the poor lambs before we have to.

Warburton’s skill as a storyteller is where she excels and here she also transcends genre. I hope she’ll write something for grown ups in due course. With panache and relative economy, she reveals the town and people of Winter, and presents a 3D community and a plausible arena, with sympathetic warriors for and against, ready for the violent denouement.

The near total lack of any modern technology did strike me as odd. A Witch in Winter has a delightfully gothic-lite vibe about it and bar a text message or two, some phone usage and a throw away comment about Google, the book is entirely technology free. I wonder if younger readers might reject that or even embrace it? I don’t know. But the absence of Facebook and the like felt incongruous. For this crumbling reader it felt like a lost opportunity to further explore witchcraft and the manifold legends of Winter further.

But I quibble. This is an accomplished book, fizzing with plot and promise. I do care about Anna Winterson and worry about Seth. If a storyteller should be graded on anything it’s whether they spark curiosity in the reader about what happens next. And I’m not just curious, but anxious and expectant. Bring on A Witch in Love!

Disclosure: Ruth Warburton has been a friend of mine since went to school together in Lewes.. which bears a striking resemblance to Winter in the book, now I think of it…

Of the wards in Brighton that make up the Pavilion constituency (Caroline Lucas), only 1 is now Labour after 2 by elections. In 2015, there were 6 out of 17. Now it's Cons 3. Greens 13. Huge boost for the Greens in the city. They ran the Tories close in Patcham too!

Chris Mason on the BBC isn’t even a secret Tory.

Hurrah! It's a fun trip in itself. And also very useful.

The Carlingford Lough car ferry will resume its service between Greenore, Co Louth and Greencastle, Co Down on Saturday, May 15

Political slug creature Robert Jenrick, who is mysteriously in the cabinet, has just included Northern Ireland in his rhetoric re his 'levelling up agenda' so we can all 'build back better.' REALLY? I'd love to know specifics.