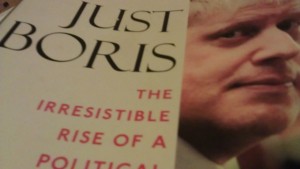 Never has a political assassination in print been so delicious, detailed, elegant and comprehensive. Having read Just Boris: The irresistable rise of a political celebrity it is almost impossible to like the Mayor of London, Boris Johnson. John Bright’s assessment of Disraeli (one of Boris’s own heroes) rather sums up Purnell’s thrust: “He is a self-made man who worships his creator.”

At first the title irked. It felt like a glib Richmal Crompton reference, promising a jolly jape guide to Boris Johnson and all those larks people seem to love him for, whilst offering nothing solid. How wrong. Just Boris is a very clever title for a book offering reams of evidence and which doesn’t shy away from the boot and putting it in. And yet, despite Sonia Purnell’s considerable craft and skill, she admits herself as author that Boris remains strangely out of reach.

Just Boris. He’s usually called just Boris. No surname. It’s just Boris: a usual shrug forgiving his latest gaffe or infidelity. Just Boris: he’s a bit of a loner, without a political gang or indeed ally outside his family. Or, perhaps most damning from Sonia Purnell, just Boris may be the man’s political philosophy. His political career is just for him. He does apparently harbour the ambition, indeed the destiny, that just Boris will be primus inter pares.

The simple fact is that Boris Johnson simply isn’t who he seems. He ruffles his hair before the camera rolls or shuts. His first name is Alexander, and his family and wife call him Al. The chimera Boris emerged at Eton and was honed at Oxford. He is hardly that posh or aristocratic, his family are neither devastatingly rich by any Etonian standard and he is also not necessarily as clever as many people assume, despite the constant classical references. His particular skill seems to be provocation.

Alexander Boris de Pfeffel Johnson was born in New York, had a peripatetic childhood and his parents divorced when they lived in Belgium. His mother is American, there is a strong Turkish vibe in his lineage and his wife is half Indian. His father claims to be “dogged” by good luck. The question that Purnell keeps asking is right: Who the hell is this man and what does he want?

The books swings elegantly through his time with the Times (he got sacked for faking a quote), the Telegraph (where he was famed for tardiness) and through to his tenure as editor of the Spectator.

His time as an MP for Henley and campaign for the Mayoralty are examined forensically. In fact, maybe too much. This is a big book. His affairs and misbehaviours are manifold and major. But yet Boris just bounces back again and again and became the most powerful Conservative in Britain, for a while.

The most damning criticism is levelled at Mayor Boris. That he just really isn’t very good at the job ought to stick. His achievements are sparse. And yet it seems likely he will be re-elected, whilst still harbouring none too secret ambitions to lead the Tories and be PM.

Just Boris is an addictive book that stirs nothing but disquiet. How has he slipped through the net? He gets away with everything and seems to suffer little scrutiny. There is no “just” about Boris.