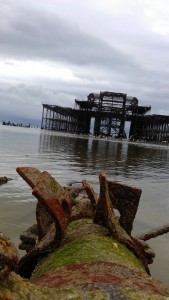 Last year, as part of the Brighton Fringe Festival, submissions for short stories were sought on the theme ‘Brighton: past, present and future.” Selected stories would be read to an audience by actors. Here’s my submission, and it was most gratifying to hear it read.

The West Pier spangled brand new in the filtered sunlight. Serene and perfect. Every rivet in the right place. The delicate, decorative ironwork gleaming and freshly painted stretching over the pebbles and out to sea.

Smiling staff in ersatz Edwardian garb made the final preparations before the official opening as people admired the pier from the shore anxious for their first promenade. I wanted to be excited but something wasn’t right. The exact flaw eluded me. Obviously the sea smelt all wrong but that was to be expected. Some things can’t be faked.

“As promised,” boomed the jovial piermaster Captain Stroudley as he approached, hand outstretched from his absurd period naval uniform, like something out of an old Titanic movie, “the West Pier reborn. There’s just one thing missing!” He was accompanied by a small, precise woman “How rude of me. Professor Russell, meet Miss Freshfield, our chief engineer. The genius behind the replication. She’ll show you everything you need to see, if you’ll excuse me.”

“All we need now Professor,” Freshfield said shyly as we shook hands, “is your certification from Earth Heritage. Shall I give you a tour?” Over the next few hours, she led a methodical examination from end to end of the new pier, taking in every detail. Miss Freshfield pointed out the pebbles, nearly a million tons, imported all the way and completely authentic. The lattice of supports below dipping down into the waves were bare now but hopefully in time they would work out a way to recreate the seaweed and barnacle encrustations. “But we will need to reconstitute the sea for vegetation. It can’t support life yet.” I made notes as we went along.

When we reached the end of the pier and leant against the balustrade looking back down the pier, I told Miss Freshfield I had a few questions.

“And remember, I’m not an architect or an engineer. I’m a consulting historian specialising in relatively modern history, specifically the 19th and 20th Century. The Earth Heritage council criteria are quite vague but I am required to ascertain that the attraction has an ‘atmosphere of authenticity.’”

“We have followed the original plans as best we can,” Freshfield explained, “making design alterations only for safety concerns and, shall we say, the unique environmental situation of the replica.” She chuckled. “And naturally, some allowances were inevitable with regard to materials. It quite simply hasn’t been possible to source everything that was available 500 years ago.” Miss Freshfield spoke quietly, never quite meeting my gaze. “But we have done our best.”

“Yes, it is impressive. A beautiful pier. But why replicate an old British Seaside pier at all? Does the West Pier warrant Earth Heritage status?” I wondered. Not really meaning to say it out loud.

I paused to get my thoughts straight. Earth Heritage exists to protect the treasures of humanity from the searise. When the ice melted and the water rose, so many wonderful buildings were lost. It happened so quickly. An indestructible bubble protected the Acropolis in Athens but most of Rome can now only be admired by divers. I’d presided over the transportation of the Eiffel Tower to the Alps where it stands today next to the Tower of Pisa. This West Pier represents a problem.

“You see, my concern isn’t the quality of the replication. It’s good. And I have nothing against replication per se. The new Taj Mahal is twice the size of the original and more beautiful than ever up in the Himalayas.” I felt I must reassure Miss Freshfield that my objection wasn’t with the quality of her work. “My question is whether this new West Pier deserves Earth Heritage status at all. Can we demonstrate it has ‘global human importance’? The searise didn’t destroy it. The pier was neglected. Unloved by the people of the twenty-first century, they let it rot. Some feeble efforts were made but nothing substantial. The didn’t try to save it. Why should we?”

Miss Freshfield was about to speak when Captain Stroudley strode towards us beaming and confident. “Ladies, I will now exhibit the bells and whistles, because they really are something.” He carefully removed a control from his pocket and brandished it like a wand. “As you can see, this is now 1905. But by activating the magic of the holographic components we can travel in time. How about the 1970s? Very popular with the stag and hen parties!”

With a purple shimmer, the pier was transformed. The staff I’d assumed to be real, changed from bustles and boaters into flares and hotpants. Holograms too. Even the seafront flickered and altered. Pretty Victorian buildings were replaced with towerblocks and grey concrete. “And I can roll back time too!” He ostentatiously waved his control handset and we were back in 1905 once again. “We have 15 different settings. We’ll develop more in time. That’ll really drag the punters in.”

Stroudley continued with his pitch. The concert hall could host Mozart and the Beatles on the same bill. Shakespeare could tread the boards. Pirate ships could attack the pier! There was apparently no end to the possibilities! And then I just blurted it out. I realised what was missing. Silly really. “Why aren’t there any seagulls? Every pier needs seagulls. You could have holographic seagulls.”

He was quiet for a second. “Hmm, seagulls you say. I’ll think about it. Not sure that seagulls will excite people.” Stroudley wasn’t convinced, and changed the subject. “It’s nearly daychange, Professor. Shall we reconvene at 9am for your formal endorsement?” He doffed his naval cap and strolled jauntily down the pier content that he was the luckiest child with the whizziest toy.

“Is it true,” asked Miss Freshfield when the piermaster was out of earshot, “that you are from Brighton? The proper Brighton, I mean.”

“Yes, Brighton’s home for me. Such as the city is now.” I paused. Yes, she would appreciate knowing, I thought. “You know, I saw the West Pier once. What was left of it. I was just a little girl. You’re too young to remember the Atlantic Tsunami of ’34. It was huge and we felt it coming. We lived on one of the islands of Brighton in an old house not far from the ocean. That day the tide just kept going out, all the way, you could see the ruins of the submerged city below. And just before the water rushed back the West Pier emerged. Just a rusty skeleton, hung heavy with seaweed like long hair. The first time anyone had seen her in 200 years and just for a few minutes.”

“Amazing engineering. 500 years and she survived. Even underwater. I hope this pier lasts half as long.” Miss Freshfield then quickly added. “I’m sorry. Lots of people died that day.”

We walked back to the shore end of the pier. Miss Freshfield asked whether I’d like to join her for dinner. I declined: “I’ll linger a moment if you don’t mind. And enjoy the view. I’ve never been to the moon before and I thought I’d watch the sun rise over Europe.”

I sat on a new bench and looked back to Earth. The moonshield filter, that made the sunlight safe to human skin, was moving to a night setting and within moments I could see my so blue home planet up in the sky. The changing of the days on the same pattern as Earth was one way of keeping the colonists on this unlovable rock sane.

In the light of the Earth I admired this new West Pier. A slice of home on the moon. The atmosphere was pleasant under the gossamer dome and a manmade sea ebbing and flowing with mechanised tides sounded reassuring. I listened to the waves lapping underneath as the sun rose over home. I could just pick out the islands of Sussex at the south eastern reaches of the British Archipelago. Were those grey specks Brighton’s crammed isles, just visible?

Walking back along the prom alone, I turned to look at the pier against the inky blue background of space. It looked almost like a toy model, so neat and pristine, with lifeless dusty grey mountains majestic behind the moon dome. Behind the lunar peaks, Earth dominated the sky. The sea. The pier. The moon. The Earth. So many stars. A beautiful view that I’d never seen before.

But I wasn’t sure yet. Would I give Earth Heritage approval for a pier on the moon? Maybe. But I’d need to sleep on it. And I would definitely insist on the seagulls.